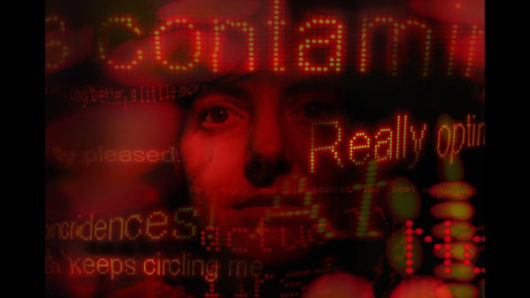 Hole creates a ‘documentary,’ set in the future, which explores the relationship between a museum and a woman who, daily, transmits a description of her emotional state to an enormous LED sign mounted on the side of the museum.
The institution feels it needs this involvement because it has become too obsessed with crowds and now wants to ground itself with an individual, an outsider.
However, the affect of influence involved in this relationship leads to a potentially malevolent situation and, the woman terminates the relationship and the sign is removed, leaving holes from where it was fixed in the museums facade. These holes – a kind of ruin – become the only physical presence in the museum (other than the video which tells this story). The holes exist in the present as a trace of something that is imagined to occur in the future.