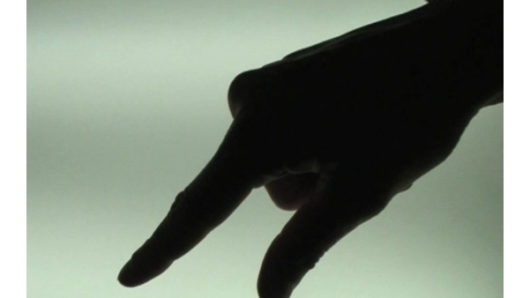 Prouvost employs the rhetoric of conventional forms of narration to blur boundaries between the viewers’ perception of the fictional narrative and the reality of the installation. The rhythm and pace of the editing in her films undermines any straightforward attributions of meaning while at the same time retaining an alluring and beguiling quality. Not to be perceived as a ‘set’ but rather a cacophony of film, painting, sculpture, text and sound, the physical elements in the installation of The Artist become the characters for the ‘film’ and the audience faced with so much information, (a dog barking, a voice calling, ‘to look here… no here!’, heavy blankets and paintings suspended from the ceiling dividing the space, a hand pointing at objects), become at once lost, emphatic and inherently part of the work.