LUX » Sophio Medoidze: ‘What I’m looking for is where the lines converge’

Sophio Medoidze: ‘What I’m looking for is where the lines converge’

An interview with the artist before the opening of 'BL CK B X Sophio Medoidze: Jackals and Drones'

Xitana (2019), the most recent video work by Sophio Medoidze, is a look at the changing landscape in Northeast Georgia. The London-based artist developed Xitana for Tyneside Cinema Projections, and it functions as a trailer of sorts for a feature-length project which will begin shooting in the summer. Let Us Flow! will examine not only the rapid change in the rural communities of her native country, but also her continuing interest in language, communication, and the often contradictory relation between image and text.

From 15 January to 22 February, 2020, visitors to Jackals and Drones, Medoidze’s new exhibition at LUX as part of our BL CK B X series, will enjoy a selection of the artist’s videos, writing, photography and sound pieces that invites a reflection on her practice and the many paths it has taken over the years. We spoke to the artist as she gave the finishing touches to the show (join us for the opening event on Saturday 18 January, 2020).

It was a bit of a detour. I started with film at film school in Tbilisi. I was already working with photography but more so since 2001, after emigrating to the UK. I think because my English was really bad I thought I needed a better understanding of language to work with film. Later I did some writing in English and combined the two and it worked. I started working with video in the mid-2000s, I like video because of its lightness and its economy of production, I film with light cameras and its something you can take with you, pick up at any time, more like a research tool. I film people very close up, usually people I know very well, and a small camera is good for that.

It also foregrounds your position and it brings that self-reflexivity that is possible with this medium. Was that something important for you at the beginning or was it something that you explored?

There was more of that in the beginning, less and less now. With longer film its more about delegating work to others, opening it up. But even with more self-reflective works, it was always about multiple voices and different perspectives. In This video is about children and language (2008-09) you have the image and you have the text, this voice that contradicts what we see, questioning everything. it twists the idea of self-reflexivity I think, of who the speaking subject is. I like to dislocate that ‘self’ slightly so that the work is not attached to me too much (and I am not attached to it in turn).

You said that the fact that your English was not good was important in your choice of photography as a medium and afterwards. Is that when your interest in language itself started? What are sources fed into that interest in language, representation and its relation to the image?

Of course, becoming a foreigner affected my work because I was living in a language that wasn’t my own. As someone who did writing especially, I became more aware of this structure and what you could do within it. Especially with English, because it’s not just any other language. I became interested in what could be done with bad grammar, spelling mistakes, slang, language spoken by minorities within a major language, all those instances of hollowing it out. Kafka is a great example.

As analysed by Deleuze and Guattari [in Kafka: Toward a Minor Literature, 1985]…

That book was really important, as well as the fact of coming across it by chance. I think I could only read [Deleuze’s] books because my English was so bad. I felt I understood them without really understanding. Sometimes you can access theory in this way, sideways, not necessarily getting it, not in a scholarly sense anyways. It coincided with what was happening in my life.

It really is about how you can claim a Language that is not your mother tongue, how you can carve out your own space within this structure (or superstructure) that is imposed on you, or you impose it on yourself, which is different.

That is one way of thinking about it, but obviously, a lot of time and a lot of works have passed since then. So how has your relationship to language changed over time, not only personally but also artistically?

I treat voice more like a musical instrument now. In jazz improv, for example, you have double bass doing its own thing, drums, sax, and the trumpet comes in with the melody, and suddenly it all comes together, before pulling in different directions again. I use voiceover somewhat like that, looking for those moments where the lines converge and it’s usually very heightened emotionally. In Xitana for example, those snippets of voiceover are very loaded.

Yes, the uses of sound and music that change part of the experience of the characters in the film. I’m thinking about the moment in Jackals and Drones when they start speaking of the Ennio Morricone tune [from The Good, the Bad and the Ugly], they start humming it and then the song comes on…

Yeah, because it’s such a common thing to reference and remember, it’s very recognisable…

It’s recognisable, it’s very common, but it’s also a sound that draws a landscape by itself and conjures up a lot of images that are also very heavily loaded. Maybe because it’s so popular it’s sometimes not as clear to the viewer that it’s so loaded, because it’s referring to a pastiche of a genre that is deeply ridden in the colonial appropriation of geography.

That’s a really interesting perspective, but I was thinking more about over-imposing Georgian landscape on something that references a very different kind of landscape, and it all looks a bit desert-like. But it’s also just funny.

Where did your interest in the landscape come from and how did you start approaching it in your work?

For five of six years, I couldn’t travel to Georgia, when I went back I noticed that while everything seemed different, it was the countryside that was changing the most. When I went up to the mountains I noticed that the youth were all wearing norm-core vis-à-vis traditional dress and I wanted to talk about that. I think we are so focused on the urban landscape, maybe something like 70% of architecture books is on urban planning and the rest would be about the countryside.

What kind of transformation?

With the digital; In places where you had to walk 10 miles to make a single phone call, you have unlimited Internet access. This really transformed the fabric of life of these people, and how they see themselves.

And also because it redraws the distance to the capital, I suppose that changes how they see themselves as part of a community.

Yes. You could argue that community is already an imagined construct, so maybe we can talk about re-imagined communities, through these different layers of distortions. I’m not necessarily saying that it’s good or bad—there are considerations about access, etcetera. I’m from Tbilisi, I used to spend time in the mountains as a child and later I went hiking a lot, so I know the area really well. its a complex relationship to a place as these are my people, but they are also ‘Other’ to me, they speak their own dialect, going back to language, which is different from Georgian. So, I am constantly in this position of an insider/outsider, and in my videos that comes in through framing, for example.

You can tell that sort of play between the tourist and the non-tourist, who is actually from the country as well, that tension in reexploring a landscape that’s supposedly ‘your own’ in a way.

I am interested in that hybrid way of looking because it is our current situation. I do wonder if there is a conflict there, because I have this chunk of land, a specific place that I’m talking about, and it’s never without referencing the world outside, so it’s like looking out while looking in.

Can you speak about how these issues feed into this new project and how it’s taking shape?

Xitana focuses on the celebration of the dead which happens on the100 days from Easter in the Georgian mountains. This episode is a bit ethnographic but it is not at the same time, because I’m not interested in making any “introductions”. As migration plays a big part in Tush lives I can really relate to that, in short, there are more elements in the longer film. In the end, what I’m looking for is where the lines converge, it’s not about differences so much as it is about connections, my desire to connect with other people. The longer film will have substantial musical elements. I’ll be working with Rezo Kiknadze, a minimalist Georgian composer. One of his compositions is in Xitana as well. It’s going to be a close collaboration. Let Us Flow! is a translation of a greeting between Tush people, which means hello or goodbye depending on the situation; Tush people spend a lot of time on the road, they travel to lower villages in winter before the roads close for nine months. This is partially why the project so difficult, I can only be there in summer. 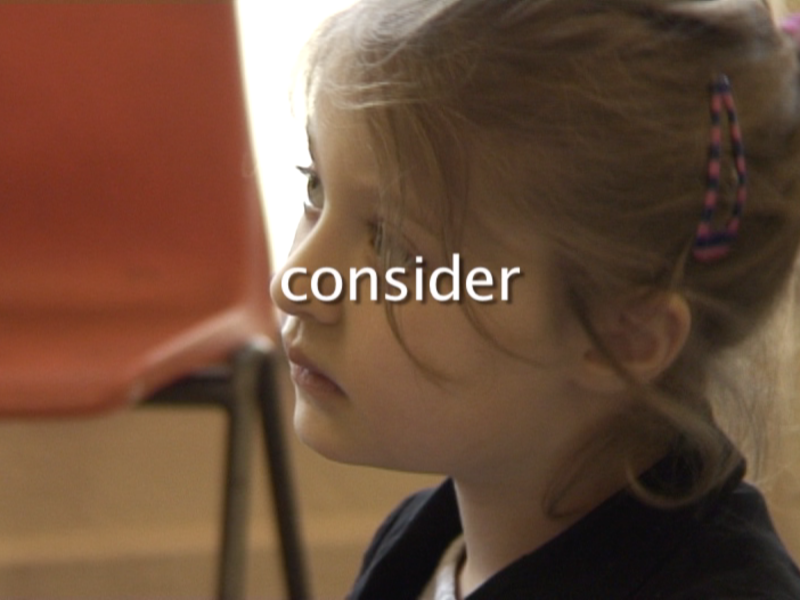 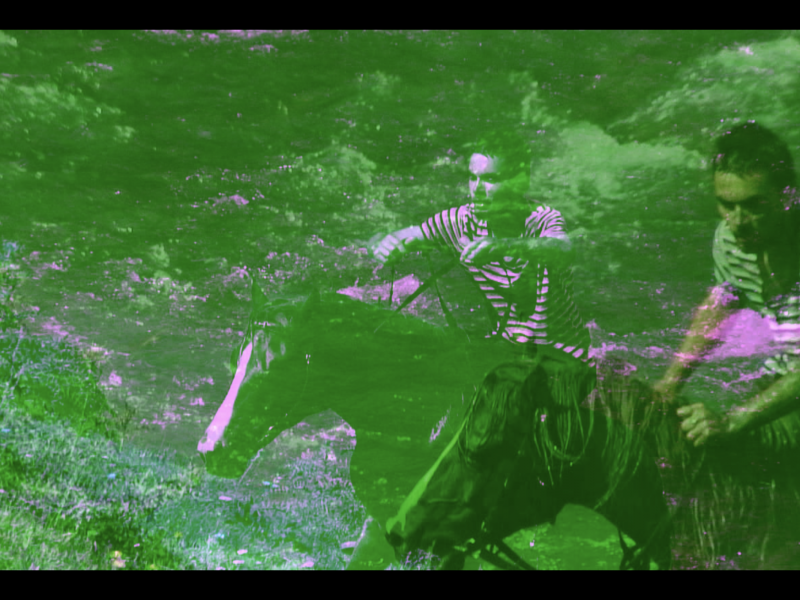 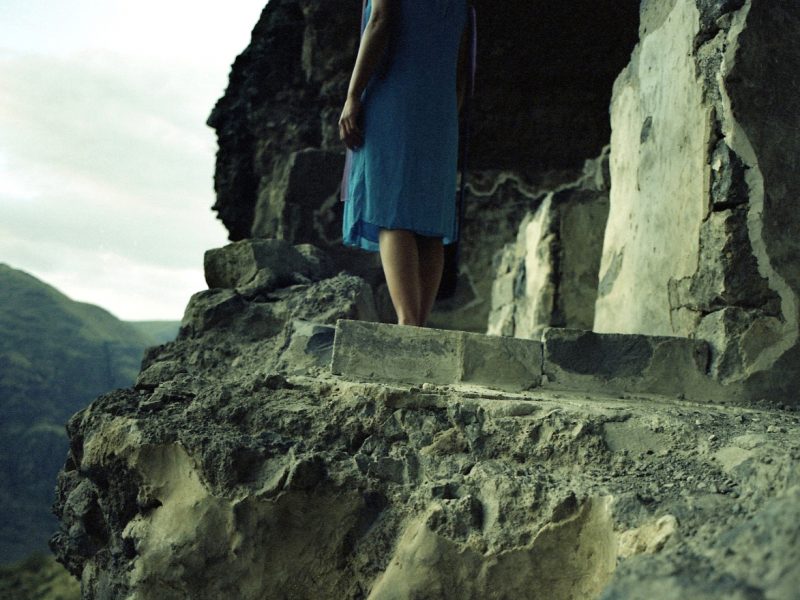 A Q&A that was not:
Sophio Medoidze in conversation with Maria Palacios Cruz