Working in various prop houses whilst a student, Patrick Hough engaged in the individual narratives of the objects he worked with, following them through the reinventions of their performative lives; hired, reused, bought and sold, appearing in multiple productions. Pastiche–or even fantastical representation–divorced from historical accuracy, they themselves are mashups of previous representations, solidified in the mind’s eye of collective cultural consciousness: Ancient Egypt somersaulted through the lens of Renaissance iconographic depiction or Victorian architectural mimicry. How does representation of the past in the cinematic production actively construct historic narrative? How does its legacy influence the future life of the ancient? Seeking to strip bare Hollywood’s Anthropofagia of history, those objects which normally seep into subliminally seductive mise en scènes are redirected to the foreground. Evoking the weight of a glossy digital catalogue of a high-end auction house, An Archaeology of Cinema (2013) pedestals gypsum obelisks and silicone Egyptian-esque figurines: momentarily detached from any back story. Silently turning, projected side by side, the Frankenstein objects sit in quizzical dialogue with one another. History is a story of selected, interwoven fictions. Cinematically lit and set against green screens for their stage solos, they lure with performative virtuosity and bask in their own independent authenticity. 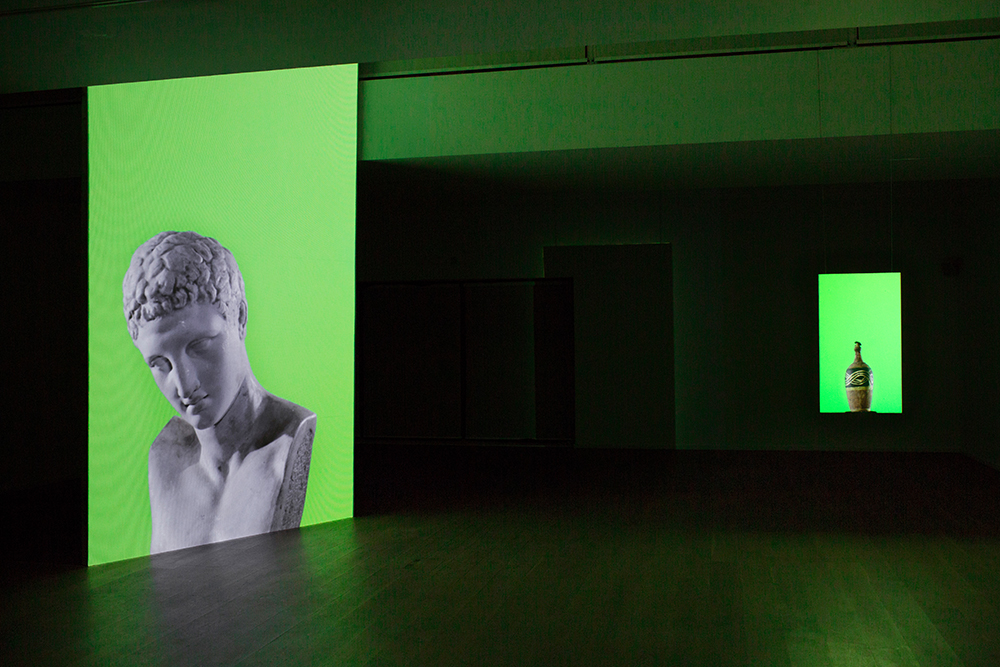 Borrowing from Heidegger’s thing theory, archaeologist Bill Brown wrote: ‘We look through objects because there are codes by which our interpretive attention makes them meaningful’. It is these codes which Hough determinedly seeks to unpick, allowing his objects to play into a game of constant reconfiguration–and misdirection. In a series of presentations to camera, Object Interviews (2013-15) invites specialists (a keeper from the British Museum, a cultural theorist and two makers) to interpret a selection of props. Crafted in the contemporary, sculpted artefacts are inspected and analysed through the weight of the 4000-year-old history imprinted in their inherited image. The props accumulate a web of material gestures, which speak to, envelope and reconfigure one another; escaping confinement of any temporal linearity. Furthermore, as Hough’s prop makers elucidate in Object Interviews (Part III), the same polystyrene sphinx may offer historic authenticity in Alexander the Great, or act as a signifier of mythology–detached from historical time–when placed in Jason the Argonauts, or evoke a sense of the cinematic time-space amongst an Indiana Jones 1930s-styled set. Whilst our understanding of the past inevitably shapes the evolving future, history exists in the imagination, a synthetic tapestry of dislocated information. The foregrounded props bring to mind Voltaire’s infamous dictum: ‘History is nothing but a pack of tricks that we play upon the dead.’ 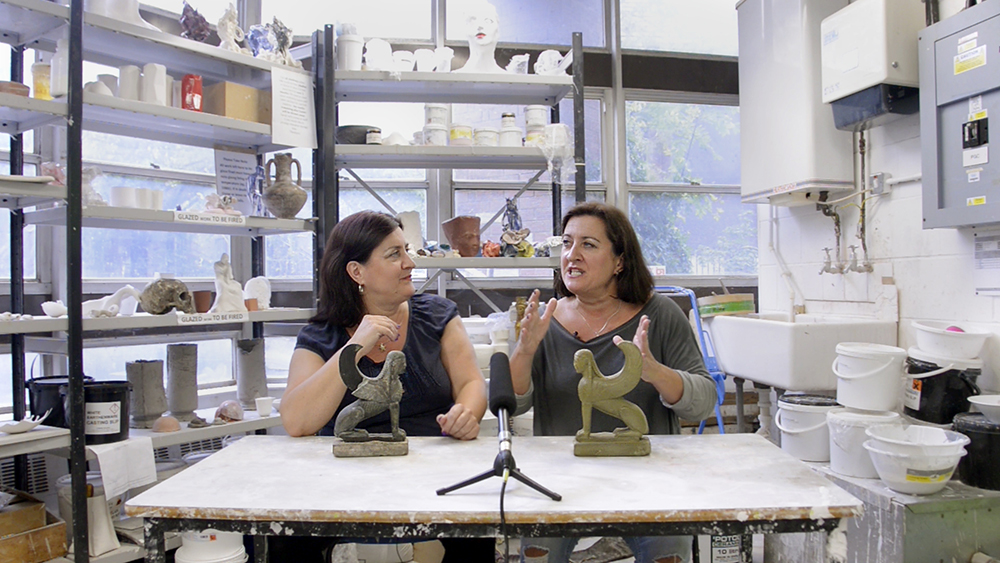 This extended enquiry comes to a culmination in his 2017 film, And If In A Thousand Years (2017). For almost a century, the monumental set of Cecil B. DeMille’s silent film The Ten Commandments (1923) has lingered under the sands of the Guadalupe-Nipomo Dunes, South California. The film set, once populated by 3,500 actors and extras, was a city in itself, complete with an avenue of 10-ton sphinxes leading to a life-size Egyptian temple; the epic constructions buried as a cost cutting exercise, an in-situ landfill. ‘If 1,000 years from now archaeologists happen to dig beneath the sands of Guadalupe,’ DeMille famously baited, ‘I hope that they will not rush into print with the amazing news that Egyptian civilization, far from being confined to the valley of the Nile, extended all the way to the Pacific Coast of North America.’ This modern-day myth is already being written into the history books. Spurred on by cryptic clues in Demille’s autobiography, archaeologists have been slowly unearthing the set since the 1980s presenting their latest findings in a nearby museum.

A voice over seemingly audio-dictates case file notes, as we see the footage of an excavation played, rewound, replayed; focusing the sound balance and replaying once again, a voice finally audible: ‘Hey we found the mouth!’ Forensically piecing together the narrative of a narrative, Hough’s camera follows a spirit-like sphinx-prop as she guides us through the town of Guadalupe, before drifting amongst the museum specimens–indistinguishable from any authentic display of Ancient Egyptian artefacts. ‘I came to light quite suddenly, I surfaced…I had simply been waiting’ her ethereal voice tells us, ‘I felt I had been already spoken, passed around in rumour or cliché… a mechanized tick’. Hough’s film stands as a commentary on the geological imprint left by the Anthropocene from contemporary over-production and flippant carelessness of our debris. Digging deeper below its exotic sandy surface though, opens up to longer temporalities within material fluctuations. The misremembered past and the new realities formed in lieu blur, as the oracle narrator continues: ‘What if I don’t bear reiteration well? […] Your angels are parasites. Your Gods lack backbones and balls’. In a Jungian resurfacing of past myth, the encoded expression of the collective unconscious, both representations of millennia old and 20th century history are perhaps merely ephemeral realisations of the human imagination. ‘Stuff and flesh will always cling and corrupt. Human nature will always grow back.’ In a world of ever-turning transformation, the authentic doesn’t exist.

Time is in question as a fundamental building block of the universe. We all have the sensation of time flowing; rushing forward towards the future. Implicit in the unfolding of And If In A Thousand Years is our own submission to a linear narrative: as we watch an artwork depicting film set, itself depicting architectures of myths that once explained creation and its inhabitants, we comply with the assumption that a series of events have unfolded through human history. Yet this experience is not substantiated in the fundamental equations of physics; there is no linear flowing of one moment to the next. As theoretical physicists of the past century have continually outlined in ever more exacting precision through the laws of quantum mechanics and thermodynamics, reality is just a complex network of events onto which we project sequences of past, present and future. Hough’s works throw this most ethereal of concepts into the tangible realm; all that is relevant of history–and with it the entirety of time–is how it exists in our individual and momentary perception.

Returning to life out of the rubble of representation, our spirit-like sphinx pieces together her own identity, through all the layers of history, time, cinema and popular culture. Eventually confronted with herself in the museum’s archaeological display, the image disintegrates into a pixilated virtual reality: existence as particle code. Point cloud data configurations float eerily past, melting away and reconfiguring: abandoned shops, empty highways, deserted landscapes in ever unstable topologies. The film set, the town of Guadalupe, the Californian dunes–and subsequently everything tangible as we know it–are revealed as unstable formations: particles accumulated momentarily. Landscapes shift, architectures emerge, ethereal sounds meld snippets of archaic music, bird sound, crickets. The universe is exposed as a series of fleeting coincidences of material interactions. ‘An outline diminished to an echo’.

In a new body of work, Hough turns away from these exotic landscapes to those of his own formation: the bogs of the Irish midlands in the surrounding areas of his hometown in County Offaly. His childhood memories are coloured by his family house powered by turf cut from the bogs, preserved 13th century monk’s relics and two of the most significant discovered bog-bodies in Ireland found within a few miles of home. Seeped in the interactions of geological temporalities, The Black River of Herself (2021) follows the unravelling intimacies between a surfacing body–stewed in the peat for two thousand years–and the archaeologist tasked with uncovering her. Turned to a leather image of herself, the bog has grown up amongst and through her; she is an organic soup of the human and non-human. Anxious to carry out his job in haste, she slows him with wisdom accumulated over her deep-time existence, her honeyed voice whispering in his ear. While the persevered body rebuilds herself from a ruined consciousness, re-finding and redefining herself in a contemporary world, the archaeologist faces the existential contemplation of the brevity of his fleeting lifespan.

Over the centuries her body has bled out into the bog, and bog has bled into her body; an exchange and merging of fluids and matter seeped in the ecological memories of the landscape. Farmers churn up the soil in nearby fields, and the lands whistle with unfathomable time. ‘We all inherit their ancestry’, the bog body’s soft voiceover continues, ‘The mitochondria relate us to the chloroplast, as the plants relate us to the peat; the peat relates us to the fire; the fire to the ash, the ash to the cloud’. A feedback loop of organic life folded into minerality and back into life once again. Soviet philosopher, Evald Ilyenkov, wrote in his essay Cosmology of the Spirit that ‘matter constantly possesses thought, constantly thinks itself…thought is an intrinsic property of matter’. This may sound situated in the mystical or metaphysical, but Ilyenkov did not mean to suggest that matter in each of its particles at each moment possesses the capacity to think, but that matter as a whole, ‘as a substance, infinite in time and space’, in its constant reconfigurations, continually engenders thinking organisms. The bogs of The Black River of Herself are some of the most biodiverse landscapes in Europe; beetles scuttle, mosses quiver, fungi ruminate and they team with microscopic societies. Moisture and time oozes from the ground, and–pulsating with organic and non-organic interaction–awaits remerging sentience.

The Black River of Herself, Patrick Hough, 2021.

Evoking Donna Haraway’s writings on evolutionary biologist Lynn Margulis’ proposal that life evolves through the long-lasting intimacy with strangers, The Black River of Herself plays out the intimacy of bodies both human and non-human, living and non-living, as they summersault through time in momentary form and formlessness, order and disorder. To reflect on the bog is to contemplate the inescapable drive of all living and non-living to enfold, engulf and digest each other; or to borrow Haraway’s analogy, ‘the vital motor of all living and dying earth’. Whilst this turn to the earthy, rooted in personal landscapes, may seem like a departure from Hough’s long-standing engagement with cinematic representation of the Ancient civilisation, both bodies of work navigate the tangled interactions between time and matter, where the past is redirected as much as the future. Challenging us to rethink the structures through which we understand existence–and our perceptions of it–alongside one another the convenient frameworks of cinematic or organic histories are instead positioned within the tireless quantum ebbs and flows that underpin our universe.

What is a wave, which moves on water without carrying with it any drop of water? A wave is not an object, in the sense that it is not made of matter that travels with it. The atoms of our body, as well, flow in and away from us. We, like waves and like all objects, or a flux of events; we are process is, for a brief time monotonous.

– Carlo Rovelli, Reality is Not What It Seems

Sophie J Williamson is a curator based between London and Margate. Since 2013, she has been Programme Curator (Exhibitions) at Camden Art Centre, where she has curated the first major solo exhibitions in the UK of artists such as Kara Walker, Glenn Ligon, Moyra Davey, Ben Rivers and Vivian Suter, among many others. From 2009–13, she was part of the inaugural team at Raven Row. Her writing has appeared in frieze, ArtMonthly, Elephant and Aesthetica. She was Gasworks Curatorial Fellow (2016) and Banff Centre for Arts and Creativity Curatorial Fellow (2020). Her anthology, Translation (Documents of Contemporary Art, Whitechapel Gallery/MIT Press) brings together writings by artists, poets, authors and theorists to reflect on the urgency of building empathy in an era of global turmoil. Her current independent research project, Undead Matter, is focused on the intimacies of being with the geological.