In the trio of films shown as part of his solo exhibition at LUX in 2019, Morgan Quaintance trained his mind on the term hysteresis, approaching the idea with studied obliqueness. “I suppose in thinking about the past and present, and the effect my films and the exhibition might have on people after they’d been to see it,” the artist states, “the word had some allure. […] I was interested in a word that wasn’t ‘trauma’, but still referenced how past events could effect the present.”[1]

Hysteresis is like a ‘memory’ that haunts the present.[2] It marks ‘the inability of a disturbed system to return to its original state when the external cause of the disturbance has been removed’—in other words: an effect that endures in the absence of the initiating cause.[3] For Pierre Bourdieu, the ‘hysteretic effect’ was a kind of ‘structural lag,’ a dissonance within the habitus—skills, dispositions, habits—that persists beyond the social conditions of its production. And before Bourdieu, Karl Marx drew an analogy between economists with anachronistic models and the character Don Quixote, who “paid the penalty for wrongly imagining that knight-errantry was equally compatible with all economic forms of society.”

Quaintance, one might argue, is a seismologist of historical disjuncture’s aftershocks, a chronicler of the no-longer-extant conditions whose effects persist to trouble our myopic, ahistorical present. Art world debates of the nineties, eighties experimental music, British postwar family life—these are what we might crudely refer to as the overarching concerns through which he articulates a history of dissonance between where power resides and where it is withheld. But Quaintance’s filmmaking is unencumbered by illustrative intent; it does more than diagnose and prognosticate. The artist moves with considerable ease over a field of varied forms, with the youthful bravura of a sound art student and the shrewdness of a seasoned polemicist—both of which are positions he has assumed over the years.

Another Decade (2018)—the first film of the Hysteresis trilogy—is a caustic response to the many triumphalist accounts of 1990s UK. Its montage of archival footage, newly captured 16mm film and standard definition video, invokes the chaos of urban life complete with charms and conflicts at every turn. Another Decade is a dizzying compendium of sound and image—one which claws at our collective amnesia to re-cast a solemnly anodyne narrative of recent history as something more conflicted, more troubled. Against the grain of the decade’s threadbare emblems—New Labour, Britpop, Cool Britannia—we are reminded of how, in the shadow of outsize multinationals, the social contract was unravelled by the usual threats of institutional racism, police brutality, gendered violence, heterosexism and this country’s irrepressible, age-old contempt for the working poor. Quaintance runs roughshod over the many digressions and minutiae that might distract us from the simple fact that not enough has changed, institutionally, over the last few decades. Another Decade contrasts the still-salient ideas of theorists and cultural producers of yesterday—Hall, Hiller, Gantjes, Araeen et al.—with the words of those at the margins, people whose lives are strangled by the whims of those in seats of power.

In the triptych’s second instalment, Anne, Richard and Paul (2018), Quaintance constructs a portrait of the experimental music of Bow Gamelan Ensemble, the now-defunct artist group in pre-gentrified East London. Commissioned by Live Art Development Agency (LADA), this fifteen-minute romp charts the collective activities of the Ensemble’s three members: performance artist Anne Bean, sculptor Richard Wilson and musician Paul Burwell. Theirs was a multiform large-scale practice of performances replete with pyrotechnics and bombastic feasts of noise and light pushing against the ascendant conservatism of a decade, the eighties, marked by contemptuous, right-wing philistinism.

Quaintance harnesses his own form to the febrile affect of the group’s chaotic art, often wrought with scrap metal, glass and sundry industrial detritus. When Anne, Richard and Paul begins, it opens with the fuzzy hiss of static and a set of colour bars—a nod to the erstwhile years of analogue technology, no doubt. The film’s subtitle, ‘a portrait of bow gamelan ensemble’ might give the impression, to those uninitiated, of a polite and cohesive snapshot whose effect is to gloss its subject with a documentarian’s eye for biographical detail. Instead, what Quaintance confects is a riotous assemblage of sound and image—archival and contemporary—commensurate with the titular trio’s unwieldy practice. Take, for example, how their 1987 work White Lightning is captured: no sound, a tiny white light flickering and gliding against a dark screen until…BANG…an explosion gives off a flash of blindingly white light. The screen turns red and a small flame flickers momentarily. Then…BANG…another explosion, again accompanied by a blinding flash.

For the moving-image artist, silences and blank screens can be judiciously placed caesura, or moments of dramatic inertia, punctuating an otherwise restless piece. In Anne, Richard and Paul (2018), there are no words or dialogue until almost four-minutes in; the soundless image is a staple in Quaintance’s young but fast-growing corpus. So, too, is the repurposed archival interview, as witnessed in Another Decade. At one point Anne Bean, the Ensemble’s only woman, appears onscreen surrounded by a muddy bog, her impish mien radiating through the exhaustion brought on by what appears to be a failed experiment. Something in her character seems to repel the very idea of defeat; call it the irrepressible spirit of DIY, if you will. The Ensemble, as Richard Burwell describes it in the film, “was of its time; it was pre-health and safety. It was a situation when experimentation was the order of the day.” Quaintance reprises these moments of possibility—moments of daring, unrestrained curiosity. He distils the energy of an era when that thing once called the avant-garde resisted, with every fibre of its counter-cultural being, real estate rapaciousness and the looming threat of art as a hobby horse for hedge funding plutocrats.

The Hysteresis trilogy’s four-part finale is an altogether different kind of portrait to the riotous one that precedes it. Quiet, personal, reflexive, Early Years (2019) is an account of one woman’s first-generation experience in Britain—a journey that begins in 1955, when she and her black Jamaican mother move into her white father’s overcrowded, working-class family home in Essex. “There was prejudice because of us being a Black family or, from my dad’s side, a mixed family,” the narrator tells us in the work’s first few minutes. “And it was almost as if, [my mother] felt, the family had driven a wedge between [her and my father] and their marriage never recovered.”

Later we learn of our narrator, aged 13, running from home to London, bound for Haight-Ashbury—a sanctuary for acidheads and fellow runaways, mythologised by Joan Didion in her epoch-making essay, “Slouching Towards Bethlehem”. But unlike the white middle-class writer who cavorted in San Francisco’s bohemia amongst its drug-addled denizens, our narrator’s trip to the heart of hippie-dom was thwarted, turning instead into a brush with the carceral system and all its racist presumptions of Black anomie. (The narrator and her white friend are apprehended by the Metropolitan police and taken to Scotland Yard where she, being black, is deemed the architect of their mischief.) What life among the hippies promised this young mixed-race woman, like the craft and art that she’d spent all summer confecting, was a moment of respite from the harshness wrought by her race, her gender, her class. Sadly, that momentary reprieve wasn’t to be. But the bathos of defeat gave way, as it often does, to more of life’s challenges and pleasures.

Quaintance’s restraint in Early Years reads as a counterpoint to the bombast of Anne, Richard and Paul and the boisterous melange of Another Decade. And if the trilogy’s coda is an exercise in finely modulated story-telling, it’s propelled by a memoirist’s commitment to introspection. Photo albums and home videos are the appurtenances of familial myth-making so often held in repose and seized upon at opportune moments. In the drama of family history, they can summon once-fugitive characters—like Valencia, the narrator’s mother’s alter ego who is left hanging as something of a loose thread, an enigma, in this matrilineal narrative. What Saidiya Hartman calls the ‘making a way out of no way’ that Black women have exemplified in modern diasporic history consists of all kinds of creative acts—forms of self-fashioning and re-configuring the world around them through movement and refusal, work and play, song and dance. We are reminded that survival can be (and has been) its own kind of creative act.

Tendai John Mutambu is Assistant Curator of Commissions and Public Programmes at Spike Island, Bristol. He was Berwick Film and Media Arts Festival’s Programming Fellow for 2019 and his most recent project is a series of five film programmes for LUX and British Council touring internationally until 2022. 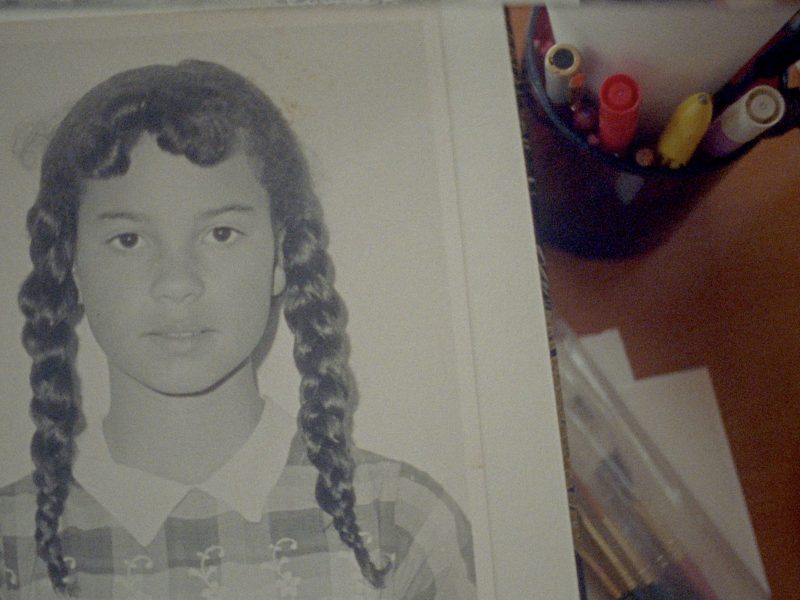