A film of a recollection of a reading of a transcription of an interview that took place more than forty years ago between a man and a woman who is not this woman we have here before us now. A memory of a memory, a narrative of a narrative, a description of a description, layers of layers—and how many channels can one channel channel?

Valentina of Frances Scott’s Valentina (2020) flickers in black and white, comes in and out of view, turns her head gently, leans against a wood-panelled wall, inclines her neck, looks down, looks up, gestures as she’s talking, hands undulating softly, like wings, like a wave, hands lifting up, fingers pressing together, pressing to her face, pressing to her mouth, fingers resting on her cheek. Valentina smiles, grins, laughs, lovely, the corona of the sun, she says, the corona of the sun, again, her eyes looking somewhere into the distance, lost in a beautiful idea. Valentina holds her hands out in front of her body, one above the other, palms facing each other, cupping the air to sculpt an invisible sphere—right above left—switch—left above right—hovering—and again. Switching… like an eclipse, Valentina says, making an eclipse, she says, lifting my hands… a circle, shaping an eclipse, although sound and image are displaced: the audio is asynchronous, a separate recording, it seems, of the woman watching her own image in the black and white film and trying to describe herself as it, and she, elapse. 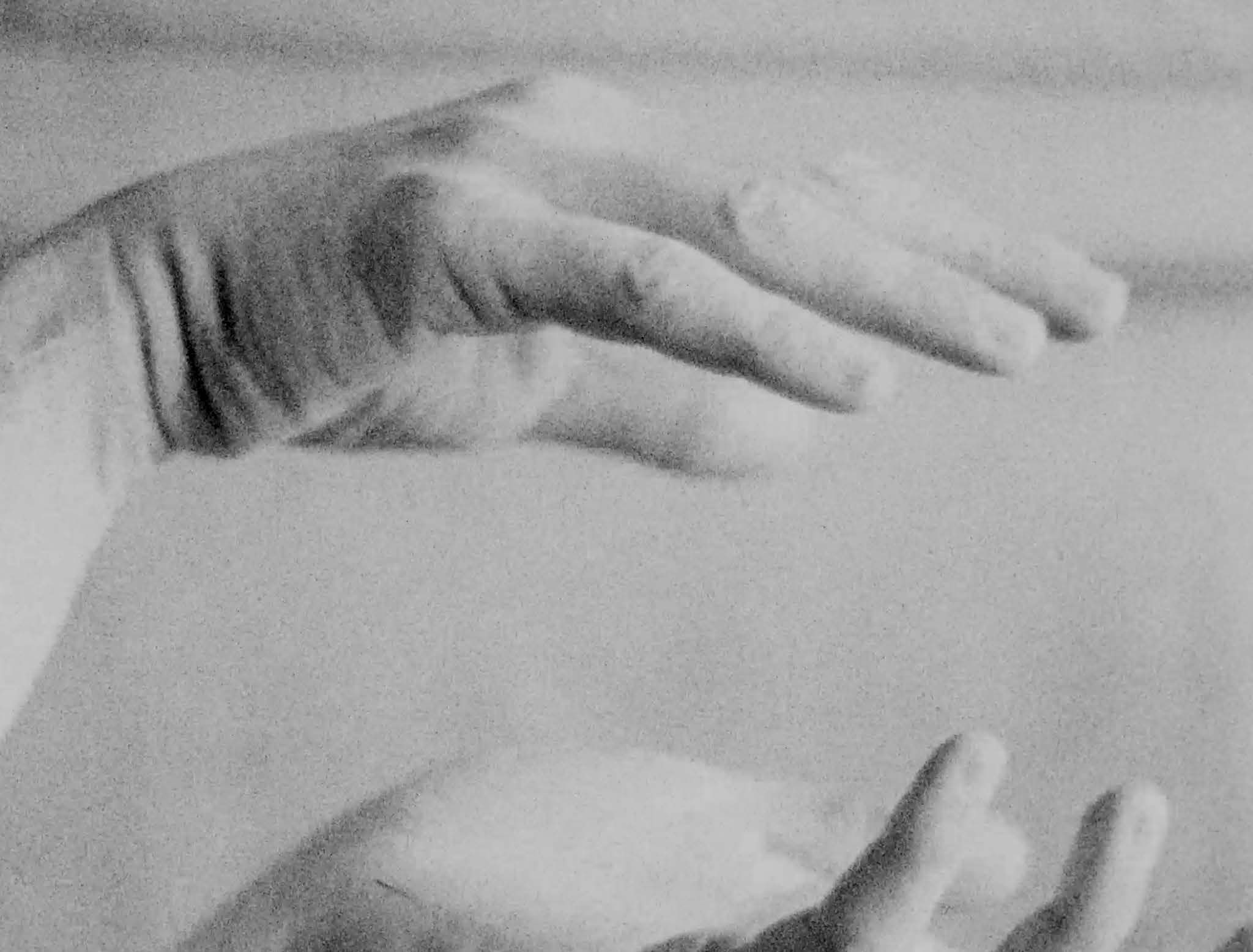 Valentina is the dancer Valentina Formenti, thinking back to the original transcription of a 1979 Playboy interview with the composer and musician Wendy Carlos. Carlos, who described herself as “the Original Synth,” famously scored the soundtracks for Stanley Kubrick’s A Clockwork Orange (1971) and The Shining (1980), contributed to the development of the Moog synthesiser, and pioneered early innovative use of the vocoder. Valentina recalls the now vanished portions of the interview (ultimately edited to focus primarily on Carlos’s gender transition), which include the composer speaking about her wide-ranging interests—her love of astronomy, mathematics, acoustic studies, cartography, solar eclipse photography, which the dancer mentions at the end of the film as she mimes a sun with her delicately posed hands. Valentina’s voiceover monologue is filtered through a vocoder that compresses and fractures her voice, blurs and alters its dynamics and spectral content, so it, like her visage, her self and her memories, emerges and recedes, never entirely settles or coheres. So many strands, elegantly twisted and twined, in a film just over 3 minutes long—and which is also a prelude to another work, currently underway, which Scott refers to evocatively as a “fan-letter” or a “speculative portrait” of Carlos.

Here I am, three paragraphs later, still grasping to capture the intricacy of Scott’s deceptively slight film. How many references, narratives, genres dovetail and overlap within it. Valentina, Wendy, Frances, Frances, Wendy, Valentina. Conduits within conduits, they repeat themselves, repeat each other, telescope back and forth in time and space. “What else than a natural and mighty palimpsest is the human brain?” asks Thomas De Quincey, in Suspiria de Profundis (1845). “Such a palimpsest is my brain; such a palimpsest, O reader! is yours.” Synthesize means to combine into a complex whole, “to make up by combination of parts or elements.” In chemistry, it is to produce a compound by synthesis; in Biology, it is “to build up a new species or form by the mating of like mutants.” A synthesizer is of course an electronic instrument, but it is also “who or that which synthesizes.” A dancer, a composer, a filmmaker, a writer. But what are her raw materials, and where to begin?

“Historical imagination gathers in the missing,” writes the poet Susan Howe; and “Documents resemble people talking in sleep. To exist is one thing, to be perceived another”; and “I wish I could tenderly lift from the dark side of history, voices that are anonymous, slighted—inarticulate.” Echoes of these sentiments—which probe the silences and ellipses of official knowledge—what we can see, or not, why and how—gather in the dark corners and temporal folds of Scott’s films. The artist’s multilayered and enigmatic constructions skirt the margins of what can be seen, known, preserved. In each work, the technologies of sound and image—specifically film, 16mm—are an integral part of the equation, as if history itself is buried deep within each medium, part and parcel of every emanation. Scott deftly shows how these can be manipulated—falter, degrade, morph, stutter, transform, surprise, come together to make something newly conscious of formal and structural possibility. And always the question: what is the guiding thread, what spools the reels of these works that seem to proceed according to some submerged yet clarified logic?

A material, the semi-synthetic plastic called cellulose nitrate, or Xylonite, as a score for a film, as in PHX [X is for Xylonite] (2019).

An archive of a region, the South West Film and Television Archive in Plymouth, as a score for a film, as in Diviner (2017).

The past and present of a landscape, West Yorkshire, as a score for a film, as in Its soil was a plot she do the tree in different voices (2017).

A metafictional script for a film that consists only of a sprawling set never to be completed as a score for another film, as in CANWEYE {  } (2016).

“So, montage is conflict,” writes Sergei Eisenstein in “The Cinematographic Principle and the Ideogram” (1929). Maybe so, but in Scott’s work, montage is also intuition. The artist’s films, frequently composites of pre-existing footage, are like readings of the unseen within the terrains she surveys. They are like reading backwards or sideways, reading through the gaps and holes to manifest what is missing, unspoken, intangible. Subjects of the artist’s films often consider at once the individual figure of the loner, soothsayer, mystic, maker, and the collective, the communal, the shared vernacular—collapsing two forms of essential knowledge into a complex for the viewer to interpret. 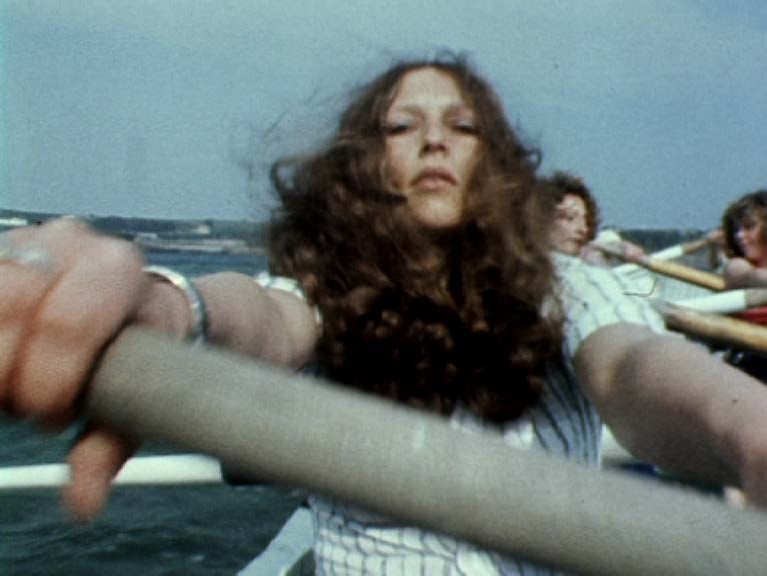 Diviner takes its title from a diviner who found water near Honiton, in Devon. The film combines footage of an older woman on the moors, crouching beneath giant boulders as though communing with the stones, eyes cast searchingly across the vast green around her, with sequences of anti-nuclear protests, the esoteric constructions of Glastonbury Festival, animals in the wild, references to occult literature, behind-the-scenes interviews with actors on location in the South West, and more. “I don’t really know myself,” says Michael Caine, knitting his brow—though we don’t know what he was asked. The audio to the film is likewise drawn and spliced from the archive, by turns eerily dissonant and curiously harmonious with the images it accompanies: “Here is this mass that hasn’t got its original shape, hasn’t got the shape you’ve been dreaming of, it’s something else,” a woman’s voice intones, as we scan through a thicket of woods—as if she is describing the process, form, and structure of Scott’s film itself. Something deep and unwieldy, something with a life and energy of its own. Something that continues to move and evolve, does not wish to sit still. The medium speaks its own language. 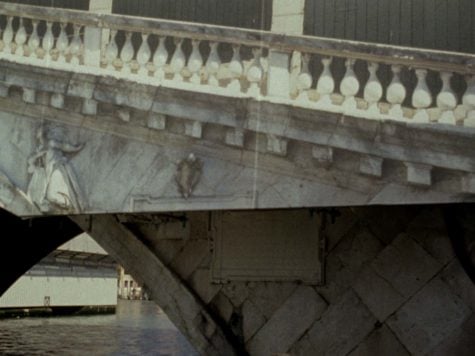 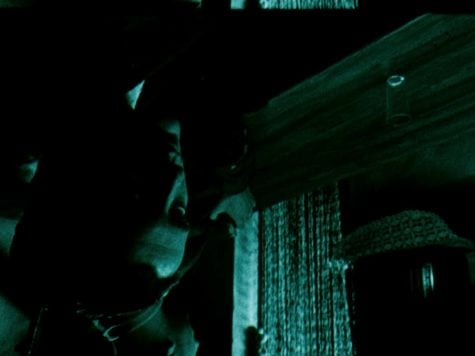 In each of she do the tree in different voices, CANWEYE {  }, and PHX [X is for Xylonite], we are guided by voiceover narratives: a solitary woodcutter describing his life in the wilds; a disembodied omniscient narrator who tells the oblique story of a sprawling film set that transforms from Canvey Island to Venice and back; a laboratory assistant who reads from Roland Barthes’ 1957 essay on plastic. These voices are punctured and overlaid with carefully crafted soundscapes—composed and designed by Chu-Li Shewring, Scott’s frequent collaborator—of myriad audio both found and constructed. We hear panting, exertion, a fight, a chainsaw ripping through the air; a Mahler-invoking string trio, the sound of creaking structures, water lapping, voices in the distance; immersive and esoteric electronic compositions, old radio broadcasts and nostalgic music fed through a vocoder, scratching and crackling, mixed frequencies, the whistle of a bird, whirring machines. The soundtracks and the films they accompany are multitudinous, sewing together a variety of materials, scenes, land- and soundscapes, histories real and imagined—reminding us that we are watching and listening to something that has been consciously constructed to reveal aspects of its making: a metonymy of form, content, structure, medium. Scott’s films propose that there is something else, something subterranean, but no less real, that we might glimpse if we look and listen hard enough at givens, or what might seem only surface. If we follow a different kind of understanding: one in which image and sound, past, present, and future are alchemical, repeat themselves, share patterns, textures, rhythms, affinities. 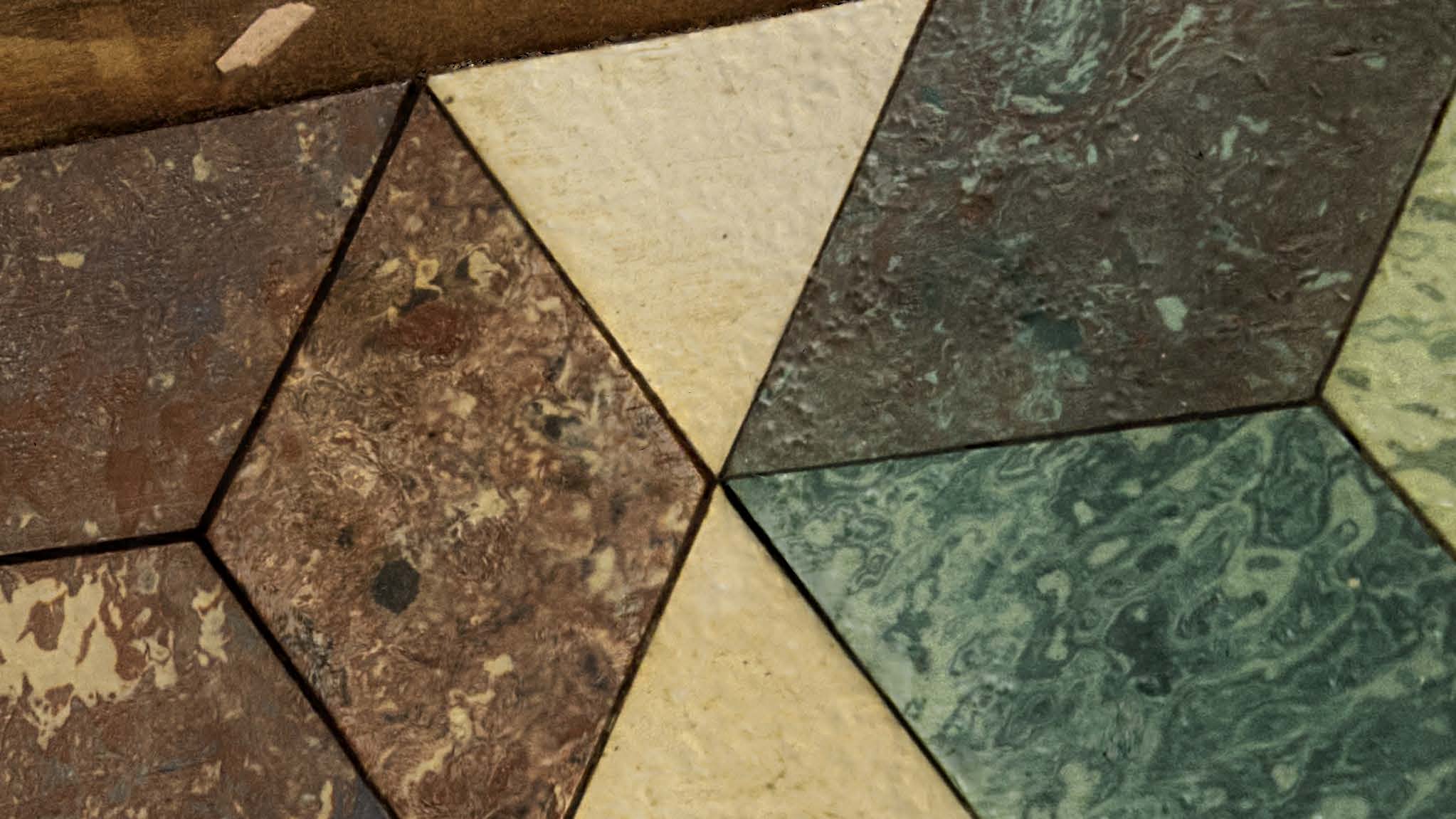 In each of Scott’s works, I found myself looking for what I came to think of as its invisible score—that which choreographs and propels its disparate but linked, rigorously organised parts. I thought of Roger Caillois, the French writer who collected precious stones in which he perceived images buried in the agate, chalcedony, marble, septaria: a ghost, a bird on a branch, a landscape, a cave, a monster. “Philosophers have not hesitated to identify the real and the rational,” writes Caillois in Pierres (1966). “I am persuaded that a different bold step…would lead to discover the grid of basic analogies and hidden connections that constitute the logic of the imaginary.” The logic of the imaginary—a brilliant image, idea, nascent possibility that echoes Henri Focillon’s The Life of Forms in Art (1943):

For form is surrounded by a certain aura: although it is our most strict definition of space, it also suggests to us the existence of other forms. It prolongs and diffuses itself throughout our dreams and fancies: we regard it, as it were, as a kind of fissure through which crowds of images aspiring to birth may be introduced into some indefinite realm—a realm which is neither that of physical extent nor that of pure thought.

Scott’s films express how both malleable and originary form can be, shifting and adapting to its content, ever seeking, tracing, transcribing the invisible score of any subject—the “other” or overlooked—to give it shape. She is like Walter Benjamin’s historian who refuses to consider sequences of events, seeing instead a constellation that is not bound to time or place. The present is, rather, “the time of now,” and it is “shot through with chips of Messianic time.” What this means and looks like within Scott’s practice shifts radically from film to film, though each is invested with the same care, attention, and perceptiveness. Each work, moreover, says—cautions, avers, avows, admonishes, hopes, reminds, gently—in its own, particular language, that everything remains partly hidden from us, until it isn’t.

Emily LaBarge is a writer based in London, where she teaches at the Royal College of Art. She has written for Artforum, Bookforum, Frieze, The White Review, Granta, and The Paris Review, among other publications. She is the London correspondent for the Montreal-based quarterly, esse arts + opinions.