The public-private relation, its history within feminist politics and its expanded function beyond the 1970s moment with which it has become synonymous, is prodded and poked at in Elkin’s most recent film, Queen. This is not an exercise in cynicism for the artist but rather a way to think through the moment at which particular bodies despite their private, personal and singular state, become public concern and more still, public property. The expectant mother is one of these bodies that straddles this threshold, the swollen stomach encouraging the touch of strangers. The function of public persona is another, in this instance, that of an artist, inviting speculation much like any other whose identity and work are closely bound. Mary Kelly’s now infamous 1973-79 Post Partum Document is a work made up of charts, lists and observations, often scribbled over by her pre-school son. The careful schema, produced by the artist, much informed by Lacanian psychoanalytical theory around the concept of desire, has to co-exist with the subject matter, the rearing of her child. Kelly makes no apologies for asking the viewer to think in tandem, to exist within the same space she must, to be split between the work of the mother and the work of the artist and the difficulties in finding a language, visual and textual, to make sense of this experience. Although Kelly documents the early years of the formation of the mother-child relation it is as much, if not more, an art work concerned with her identity as an artist as it is with her position as a mother. An element which seems to underpin Queen – and indeed which one could pull as a thread throughout Elkin’s wider body of work – is this public and private collapse of identities, personas, and subjectivities and her need to find ways to single them out, not in order to isolate them, but rather to offer up a map of co-existence and relationality.

About mid way through Elkin’s Queen there is a shot of a bowling ball spinning freely until it collides with a chair leg. This image heightens Elkin’s narrative which ebbs and flows, consistently having to change direction as more information floods in to detail the recollections that shape the voice-over. This narrative movement is kept steady throughout by an array of beats: snares fizzing, drum sticks clicking, cymbals crashing. Paradoxically whilst these keep a pace to Elkin’s voice they create an expectancy, suggesting the start of something. Queen is less an example of multiple layers, multiple meanings and the kind of vertical stacking and indeterminability this implies and more a horizontal agility in making visible the co-existence of many things at once: relationships, subjectivities, value, labour, bodies, time, and the places these occupy in proximity to one another. The steady boil throughout is the biography of the artist, her thinking out loud, the essayistic drive to link the personal to the public, the subjective to the objective. We are told via Elkin’s voice-over that ‘this is not my voice’, it is ‘simply a voice’. But of course it is both. Elkin’s voice is often melded with the other protagonists that share the screen and work to structure her films. In Dame 2 (2016) Elkin hijacks the transcript of a well-known interview between British TV talk show host, Michael Parkinson and actress Helen Mirren. The gendered and classed violence imbedded in this exchange is drawn out and intensified by Elkin through a new edit. The performance of the group set in motion with the artist’s voice-over (and text on screen) works with the harmonious and discordant aspects of the original interview in which moments of appeasement crash up against defiant redress.

In Queen, Freddy Mercury’s anthemic ‘I Want to Break Free’ – as infamous for the video in which the band members of Queen dress up as the women of the household – is harnessed by Elkin to distil a complex web of emotions. The song is not fully identifiable until the film reaches its end, though particular motifs (visual and narrative) build throughout the duration of the work. The function of the pop song has a useful duality that is efficiently put to work in Queen. The lyrics of a pop hit are universal in aim and, as such, empty enough to be filled with one’s own circumstances, marking a deeply personal moment in time shared with many others. Queen is propelled by a want, a desire, a need. Elkin’s voice tip toes, with sing song quality, up to the opening lines, repeating: “I want, I want, I want”. Before we get the answer – and the film ends with Elkin and Ben R Wallers (known as The Rebel and of bands The Country Teasers and The Male Nurse) recording their rendition of the song – the narrative skirts back and forth around several personal anecdotes. The flow of Elkin’s voice-over carefully mimics the manner in which recollections, whilst born in the past, live only through the presentation and performance of oneself.

The impact and psychological weight of memories are dealt with a lightness and humour by Elkin in Queen. This is mostly, I think, due to the delivery: Elkin’s voice-over is melodic and quick-paced reminiscent of a storyteller who is able to translate, with a playful seriousness, the messiness of life. It is also dealt with through an acceptance in the need for physical comparison, visual approximates, however literal they might be. It is refreshing to witness this grappling, the ‘it’s like this, but also, not like this’. The most obvious example being the bowling ball. It has multiple iterative functions: it’s a comparable size and weight to the artist’s pregnant stomach (but nothing like it) and it is a reminder of the moment at which Elkin realised her own mother had other roles to perform beyond that of being her mother (she worked in a bowling alley). The filmed segments that show Elkin and familiar faces from earlier parts in the film enjoy a game of bowling trades on the underlying tension of value that structures the film: the relation between paid wage, reproductive labour, artistic labour, leisure and the delicate balance needed between them for all elements to function. Of course, in our capitalist society, the paid wage overwhelmingly and parasitically distorts the necessary time and energy needed for very little outside of wage labour.

The image sequences, like the reoccurring drum beat, offer a slower pace to the film. Whether it be through the naked pregnant body which hoovers in a (familiar) disinterested and distracted manner; the care with which a bowling ball is passed from participant to participant in a group setting; the ease at which said ball sails down the bowling alley; the apparent ‘out takes’ in which snippets of informal conversations, or performed script resonate with Elkin’s over-arching narrative performed through the voice-over. Let’s pause on this distracted and distracting hovering which opens and closes the film. It is this filmed segment that echoes the aforementioned pop/rock video by Queen. In this version, it is not Freddie Mercury performing domestic drudgery, it is the artist in a state of production and literal reproduction. The function of being in drag and the ostentatious associations this brings with it is put into dialogue by Elkin with the perhaps less obvious, but equally everyday performative, gestures of being oneself or being at one with oneself. This sits uneasily at a moment when advertising has reached its apex through its dovetailing with social media. There is great currency trading on the ‘real’ despite the fact that an authentic self, certainly in any singular sense, does not exist, let along through any type of biological determinism.

We know how all too tempting it is to let biographical details determine our reading of the art work. Indeed, cultural theorists and art historians such as Christine Battersby or Griselda Pollock mapped histories of the formation of the genius (male)/hysterical (female) artist figure in the late 1970s and 1980s. Yet this is one of the elements that Elkin’s work is unafraid to work through: that of the prism of biography. The often stark differentiations made between capturing someone unawares and performing (say, a script) are brought in closer orbit by Elkin. In her 2014 film, Michael’s Theme, the relationship between the practiced spontaneity of the talk show host, the ‘live’ studio audience and the jazz band is heightened through a repeated set of gestures which foreground the notion of rehearsal. The mediums of performance and film are well placed to interrogate the relation between the real and the artifice. What often mediates this relation between mediums of ‘liveness’ and the ‘recorded’ is Elkin’s essayistic voice which works to offer the viewer a range of studies on the question and parameters of performativity.

Amy Charlesworth is a lecturer in Art History at The Open University. She has published in journals such as The Oxford Art Journal and Third Text and for the Fotomuseum, Winterthur (Switzerland) as part of Manifesta 11. 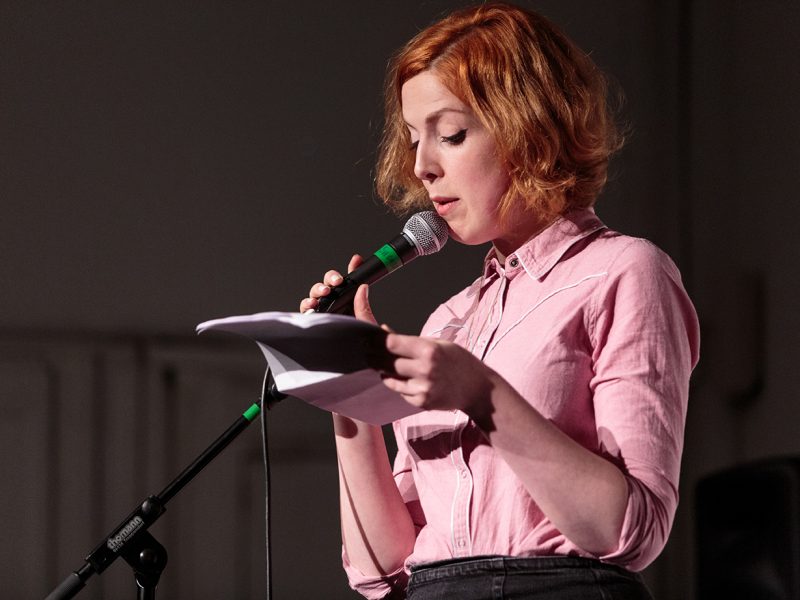 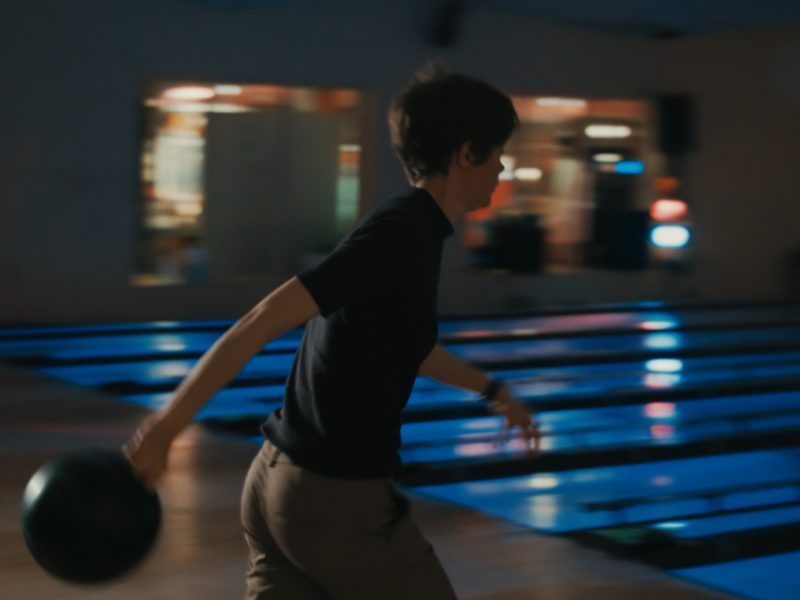 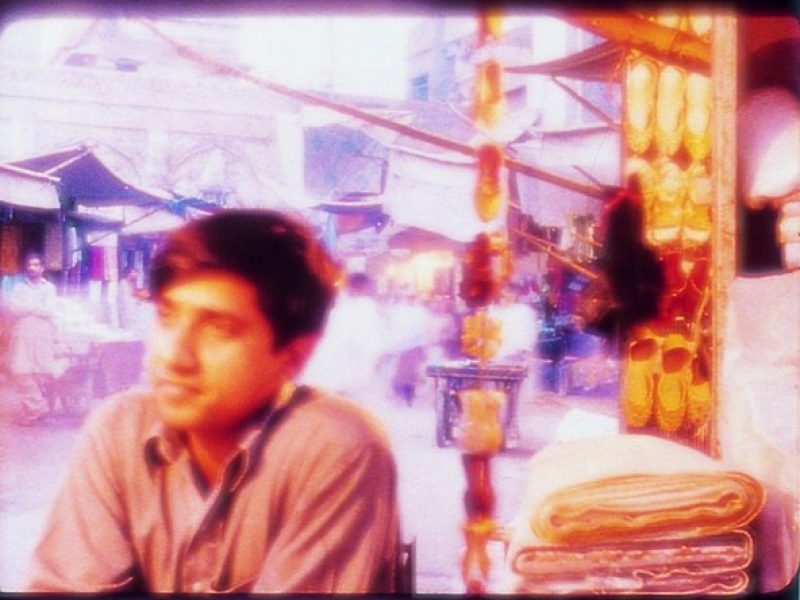