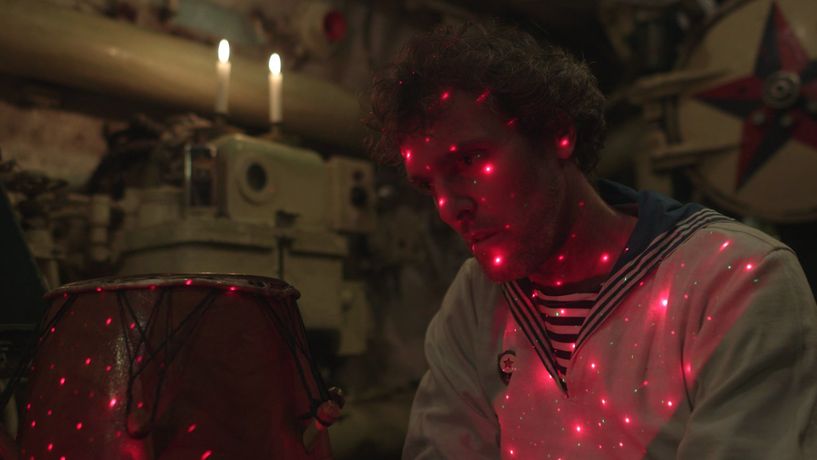 The Mindset Suite is the first feature length film by acclaimed video artist George Barber. Produced over the past seven years, the film circles the insidious militarisation of contemporary life and its physical and existential impact on humans and environment. With Barber’s unique style and dark humour, this essay film employs hybrid forms of voice over, found footage, actors, improvisers, fiction, poetry, documentary and rave visuals to tell its story.  The West is almost in constant war now and has been for 25 years. War is still one of the biggest financial muscles in our economy. Ironically, the West is very proud of having no wars since WW2 – on its own territory – yet has been extremely active at keeping them going on other’s. The hidden ubiquity of military influence is constantly understated.
Through a series of distinct but linked chapters the film examines IEDS, drones, amputation, prosthetic limbs, military strategy, technology, politics and habitat destruction. The mid-point of the film is an ‘interview’ with the former British Prime Minster as a series of improvisers ‘channel’ Tony Blair. Written by Barber, with striking digital animations by Damon O’Connell, and sound design and editing by Lionel Johnson, the film builds a powerful view on our contemporary world and despite the seeming hopelessness of the subject, the film ultimately reaffirms the potential for art, humour, spirit and poetics to make sense of the current apocalyptic moment.
George Barber
George Barber is a moving image artist living and working in London. He has been an influential figure since the 1980s, when he was a leading voice in the Scratch Video movement. In 2019 the British Film Institute’s National Archive put his work in their collection, as has The Tate Library. His works have been shown at many international festivals, competitions, galleries, been broadcast on television and awarded major prizes and grants. He has had work screened at the Tate Britain, The Freestone Drone and an installation, Automotive Action Painting (Film & Video Umbrella). The work was also shown at the Royal Academy, curated by Richard Wilson. Other galleries where he has shown are, Kate Macgarry Gallery, The Whitechapel Gallery, Seventeen Gallery, London, Sadler’s Wells, Transmission Gallery, Scotland, Anthony Wilkinson Gallery, London, Split Film Festival, Croatia, Tate Modern, BFI Southbank, London Film Festival and The Victoria & Albert Museum. The 2019 BBC survey of video art, Kill Your TV featured Barber as a key contributor. During his career, he has had notable solo shows: ICA, London; Gallery West, London; Dundee Contemporary Arts, Scotland; Open Eye Gallery, Liverpool; Marc De Puchredon Gallery, Basel, Switzerland; Young Projects, Los Angeles, USA; Waterside Contemporary, London; Chapter Arts, Cardiff and TACO Gallery, London.