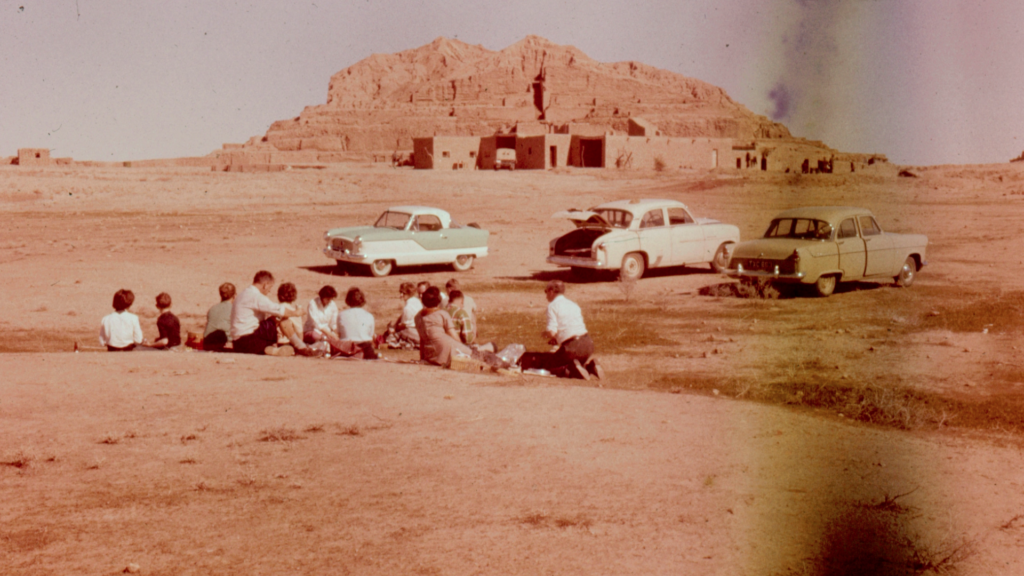 A filmmaker turns forensic detective as she pieces together hundreds of photographs in search of what she believes to be a buried history, only to find herself inside the story she is researching. The Host investigates the activities of British Petroleum (BP) in Iran; a tale of power, imperial hubris and catastrophe. While the tectonic plates of geopolitical conspiracy shift in the background, the film asks us to look, and look again, at images produced by the oil company and personal photos taken by its British staff in Iran– including the filmmaker’s parents– not for what they show, but for what they betray. The Host is about the stories we tell about ourselves and others, the facts and fictions we live by – and their consequences.

‘This sober, respectful and devastating work is one of the year’s highlights, a quiet and insistent probe into the act of making and marking territory, of the way identity is constructed in serial acts of necessary blindness’
Mike Hoolboom for Pleasure Dome, Toronto

‘Like the Iranian oil workers who haunt Pennell, this is a film that refuses to get back into its box’
Sukhdev Sandhu, in Sight & Sound.

More info about this film: https://filmthehost.wordpress.com

Miranda Pennell
Miranda Pennell originally studied contemporary dance before making films, and later obtained a masters in visual anthropology. Her film and video work exploring different forms of collective performance whether dancers, soldiers or fight directors, has been widely broadcast internationally and presented in festival and gallery contexts. Her recent moving-image work uses archival materials as the starting point for a reflection on the colonial imaginary. Her film Why Colonel Bunny Was Killed (2010) examines British image-making in the Afghan borderlands at the turn of the 20th century. It was awarded best international film at the 2011 Images Festival, Toronto, and Courtisane Festival of Film & Media Art, Ghent. Pennell’s feature-length film The Host (2015) toured selected UK arthouse cinemas in 2016, and was awarded the 2017 Punto de Vista Award for Best Film at the International Documentary Film Festival of Navarra. In 2011 she received an AHRC scholarship for her doctoral research at the University of Westminster. She has worked as a freelance commercials director, a teacher in the fields of film, video and performance, and she also writes and curates.