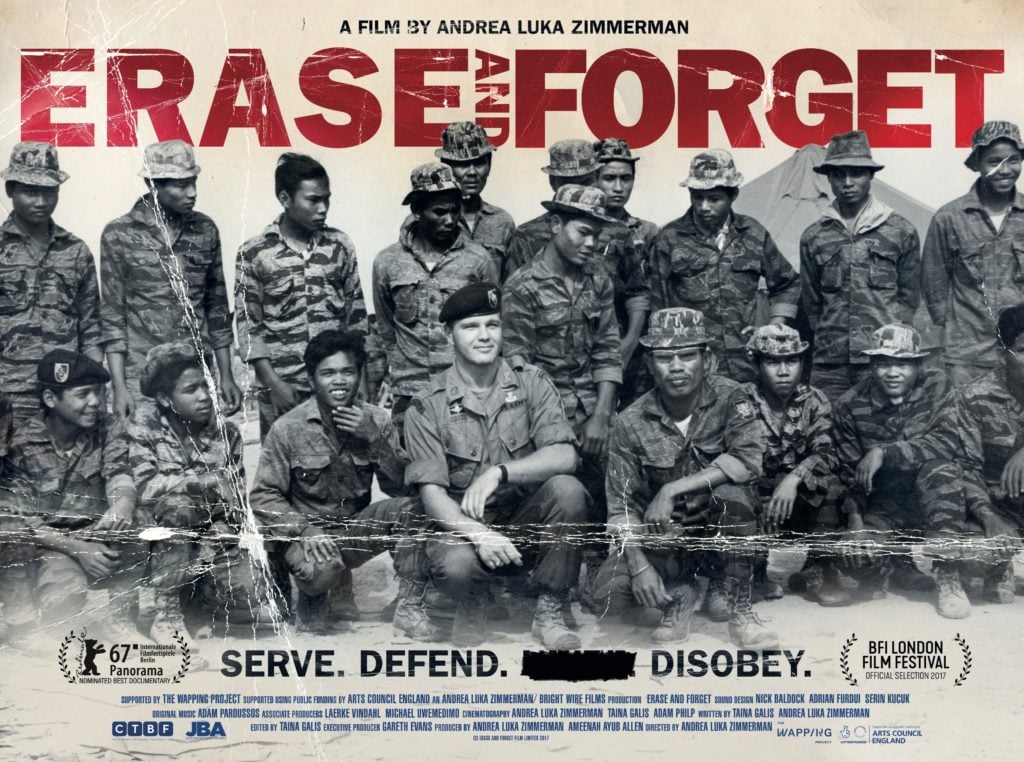 Charting ‘the deep bonds between Hollywood’s fictionalized conflicts and America’s hidden wars’, Andrea Luka Zimmerman’s ERASE AND FORGET is a new investigative documentary which charts the extraordinary life and times of Bo Gritz, one of America’s highest decorated veterans and the ‘inspiration’ for Rambo and Brando’s Colonel Kurtz.

Using never before seen archive footage of covert US operations, and interviews filmed over a ten year period, ERASE AND FORGET provides a complex perspective of an individual and a country in crisis.

ERASE AND FORGET is a compelling inquiry into the nature of human conscience which raises urgent questions about US militarism and gun control, and embodies contemporary American society in all its dizzying complexity and contradictions.

‘..like a Lynchian nightmare of right-wing America.’ Total Film ★★★★

‘The film is so loopy you end up like Laocoön, wreathed by serpents of paradox and contradiction.’ Financial Times ★★★★

‘An especially probing portrait of a wounded man and his role in the fetishisation of state-sanctioned violence.’ Time Out ★★★★

‘This illuminating portrait of a rather broken champion is enriched by extraordinary archive footage.’ Filmuforia ★★★★

‘Gripping and jaw-dropping, it’s a documentary that needs to be seen to be believed.’ Morning Star ★★★★

‘Bo’s nonchalance when talking about his behaviour in countries such as Panama makes your jaw drop. An education.’ EVENING STANDARD

Andrea Luka Zimmerman is an artist, filmmaker and cultural activist. Andrea’s work is concerned with marginalisation, social justice and structural violence and has been nominated for the Grierson and Jarman awards. Films include Erase and Forget (2017), which had its World Premiere at the Berlin Film Festival (nominated for the Original Documentary Award), Estate, a Reverie (2015) and Taskafa, Stories of the Street (2013), written and voiced by the late John Berger. Selected exhibitions include Civil Rites, the London Open, Whitechapel Gallery and Common Ground, Spike Island, Bristol. She co-founded the cultural collectives Fugitive Images and Vision Machine (collaborators on Academy Award® nominated feature documentary The Look of Silence).

‘This is a new way to make a documentary, exploiting the bountiful public record of the Internet age.’ Variety