LUX » The long tail of the LUX collection

The long tail of the LUX collection

As of this morning, according to our more-or-less reliable database, there were 5,720 different works in the LUX collection. Of those thousands of works, perhaps ten percent are in regular circulation. The rest form a very long tail, ranging from those that have occasional screenings to a few which have probably not seen the light of day since they were completed.

This is not a reflection on the quality of these lesser-seen works – some are just as significant as those which have become part of the canon. Some works are widely seen for a time after they are made and then slowly forgotten. Others are what Donald Rumsfeld might call ‘known unknowns’ – works that most people know very little about, other than that they exist. It is difficult for a programmer or curator to take a risk on a work they have never seen, let alone if there is little information about its content – but the less a work is screened, the smaller the chance it will be written about or picked for other programmes, and so many works become trapped in a vicious circle.

As a way to begin redressing the balance, we decided to dedicate some time to exploring parts of the collection that we were less familiar with ourselves in a quest to uncover works which had been undeservedly overlooked, for whatever reason. This is going to be a long-term project  with a number of different strands, not least the development of our online catalogue; but the first public fruit of our research will be the programme The Undistributed Middle, which brings together some neglected classics in newly-digitised form and which screens at South London Gallery on September 14th 2011.

The research itself involved a mixture of canvassed opinions, detective work and a dash of lucky dip. Our online catalogue of the collection, pieced together largely from the catalogues of our predecessors of the London Filmmakers Coop and London Electronic Arts, is still very much a work in progress, with lots of skeletal entries reflecting the lack of information we have about some older works – and it also has its share of red herrings. The very first film we picked out was Bridges (1984) by Theo Wright, which the catalogue glossed promisingly as, “A man’s life is depicted as a walk around the city of New York.” The first bridge that the protagonist crossed looked distinctly provincial – upstate New York maybe? The second bridge was also not a very convincing slice of the Big Apple. By the third, we had twigged: this was very much old York (Yorkshire). Even where they are not actually misleading, catalogue entries as they were originally written often don’t leave those unfamiliar with a film much the wiser – for example, take the entry for Fred Marshall’s Occasion (a poppy, slyly political collage from the late 1960s) which reads simply: “Stream of consciousness film; shot in France; very worker fantasy.” Some, in fact, are positively haiku-like and probably deserve anthologising in their own right – who can forget John Stehura’s rallying cry for the actually very seminal Cibernetik 5.3, “The film should be shown only around midnight and good luck to human embryo implantation in England”?

We watched scores of works which reflected the almost inconceivable variety of the collection: agitprop infomercials, early computer animations, camp Beat dramas, bluescreen graffiti antics, durational performance videos, pop culture cut-ups etc. The programme for SLG features some of our favourite discoveries, without much much in common other than that we felt they were not as well known as they deserved to be, so it runs the gamut from Margaret Raspe‘s intimate super 8 camera-helmet experiments to the skinheads on the set of a computer commercial in Terry Flaxton’s anarchic version of a making-of video. But there were lots of works which we simply couldn’t fit in: Mike Dunford‘s structuralist-baiting masterpiece Part-Time Virgin; Neil Armstrong‘s playful vision-mixed meditations on representation and its limits; Penny Dedman‘s dissection of Chinese comics; Bruce Baillie‘s little-seen later video portrait, The P-38 Pilot;  the collective newsreels made at the height of student unrest in Italy in 1968, Cinegiornale; and many more.

We will be revisiting these and other works over the coming months, with a mixture of new digital restorations, screenings, touring programmes and features on our website. And we will be trying to flesh out our catalogue too – though hopefully without losing any of its historical and literary qualities along the way. 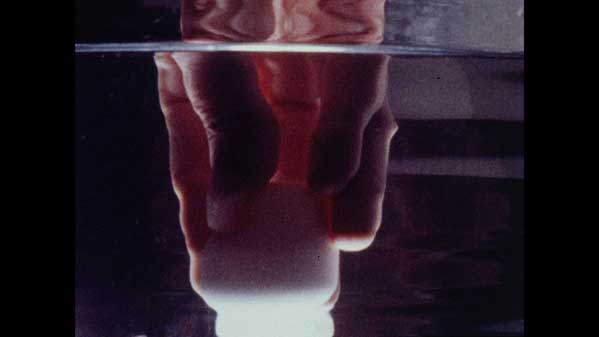