Friday 26 September 7pm, Tate Modern (as part of the TV as Material weekend)

Artists and Archives: Artists’ Moving Image at the BBC is a unique residency programme based at BBC Scotland organised by LUX and BBC Arts, offering six artists unprecedented access to the facilities and archives of the BBC. This programme includes the London premiere of six new moving image works produced as part of the 2014 residency. These events showcase a diverse range of artists’ approaches both to television and the archive, and include the premieres of works by Kate Davis, Kathryn Elkin, Luke Fowler, Torsten Lauschmann, Stephen Sutcliffe and Alia Syed.

Artists and Archive: Artists’ Moving Image at the BBC is supported by BBC Scotland, LUX and Creative Scotland.

The new works will be available to view online on the BBC Arts website from Monday 29 September 2014 and for public screening and exhibition through LUX Distribution.

‘Taking a 1961 BBC documentary about artist Barbara Hepworth as its starting point, Weight explores how televised depictions of creativity have constructed our understanding of artistic production and other forms of labour. Weight re-imagines the value systems that this documentary is predicated upon and proposes an alternative vision.’ – Kate Davis

Michael’s Theme uses previously unbroadcast fragments from the opening and closing of several episodes in the first two series of Parkinson from the 1970s. The work explores the talk-show convention of revealing the mechanisms of television-making, as well as the notion of improvisation within the ‘recorded- as-live’ TV format and within the repeated live renditions of the jazz theme tune in those earlier episodes. These excerpts and the theme tune for the programme are used as a point of departure to consider the relationship of a live studio audience, crew and talk show host each to other, and how their complicit relationship anticipates the audience who will watch the deferred broadcast.’ – Kathryn Elkin

‘Luke Fowler’s films dwell on potentiality: what might be, what might have been, what might still be if the world were to turn in a different direction? But film time runs in many directions, as do arguments. Film made only recently can be easily confused with the archival vintage of washed-out or saturated tones and blurred edges. Only the disjunction between sounds that live close within the ear and rich voices from a fading past distinguish archive from present. Gradually the pieces converge: our nostalgia for ancient folkways, traditional song and the romance of freedom, all undercut by scientific rationalism and the pressures of normativity bringing law to bear on lives resistant to conformity. What is an archive if not a collection of letters to ourselves?’ – David Toop

‘Crazy Paving is a philosophical journey into human understanding, exploring how we derive and construct meaning from objects, belief systems and the culture that surrounds us. It attempts to find meaning though connecting such diverse phenomena as Art, the Placebo effect and Spoon bending.’ – Torsten Lauschmann

A reworking of the BBC television programme The Hidden God, Alain Robbe-Grillet using methods appropriated from Pasolini’s trailer for his 1969 film Medea.

‘The objects and places we cannot leave behind create the tapestry that is Points of Departure. Exploring themes of personal and collective memory through my relationship to the city of Glasgow, a voice over describes a tablecloth I retrieved whilst clearing my elderly father’s house. The film attempts to unravel the threads of memory held within this mundane item and to find an image within the BBC archive that relates to my memories of growing up in Glasgow.

‘My father’s unrehearsed attempts to translate an Urdu Ghazal discovered in the archive, a poetic expression of the beauty of love and the pain of loss exposes a process of translation that becomes the key allowing a path through the labyrinth of both my own memory and the BBC archive.’ – Alia Syed 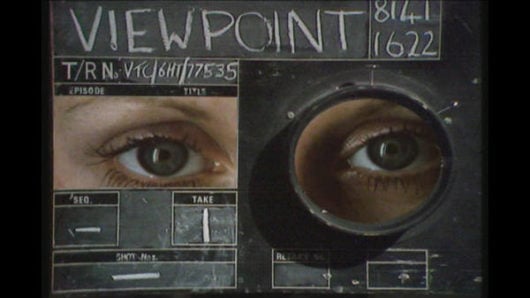