“Honey, I’m Data!” is an ongoing season of events, salons, workshops and digital encounters, exploring the extension of our identities into digital data.

Commissioned by Hervisions, “Honey, I’m Data!” will celebrate and recognise the epoch of ideas emulating from data-inspired artworks, the relationship we have to our data, and what that means for the future of identity.

The season launched on 27 May with an online ‘Data Party’: a live-streamed discussion with performances, hosted and streamed on the LUX website. The party marked the implementation of the new General Data Protection Regulation laws, which came into effect on 25th May.

“Honey, I’m Data!” GDPR Data Party! is the first event in a series of workshops and talks, commissioned by Hervisions at LUX. The title “Honey, I’m Data!” derives from a speculative interactive RPG installation conceptualised by Keiken in 2016, in which players enter into a shifted reality where their Quantified Self (personal biometric data) alters a reactive environment.

Watch the live-stream of the “Honey, I’m Data!” GDPR Data Party! below, recorded on 27 May, 7pm 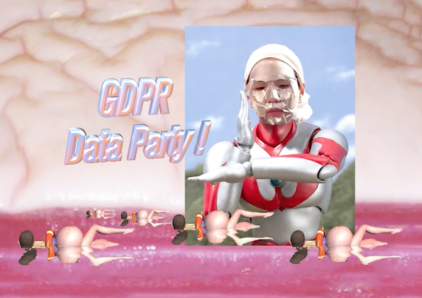 Zaiba Jabbar is an award-winning film director based in London and founder of Hervisions, with nearly 10 years experience in the industry. Hervisions is a multidisciplinary showcase celebrating contemporary short-form moving image made by non-binary artists and artists that identify as women. They exhibit GIFs, music videos, art films fashion films, and short docs.

The fundamentals of Hervisions is to showcase the exciting and diverse range of approaches that female creators are exploring through disciplines that span art, photography, and film.

We aim to do so with events combining screenings, panel discussions, and digital encounters for female creators to come together. Developing a global community of like-minded creatives. Acting as digital curators celebrating the wealth of work created by talented women globally.

Since launching in October 2016, Zaiba has held exhibitions in LA and London, created a Hervisions visual podcast in collaboration with Specta and commissioned work for i-D’s Fifth Sense x Chanel platform.Most recently Hervisions London was featured in Hunger’s online magazine, which said: “Hervisions is the new exhibition of moving image by women…Digital installations and virtual reality are the future of art. With limitless space for experimentation, today’s most visionary creatives are embracing the power of the moving image.”

Keiken are a collective and organisation comprised of artists and musicians who merge the latest technologies such as VR with music and interactive contemporary art. Co-directed by Tanya Cruz, Hana Omori and Isabel Ramos, Keiken are comprised of multiple collaborators.

Keiken, meaning experience, is the nucleus of their philosophy and practice where they strive to push the boundaries of immersivity. They activate networked spaces using gaming theories such as world-building and RPG (role-playing games). This is then used as a site in which the consciousness of archetypal stereotypes and figures are used to unravel the futures and ramifications of our accelerating technological age.

Doreen A. Ríos graduated from the MA in Contemporary Curation at Winchester School of Arts, University of Southampton, specialised in digital cultures, and from the BA in Architecture at Tecnológico de Monterrey, specialised in visual representation. Her work focuses on research and curation of digital art and post-digital practices.Founder of [ANTI]MATERIA a platform that aims to facilitate international exchanges between art professionals, researchers and theorists interested in digital practices. As part of this project she has curated several shows in Mexico and in the U.K., such as: My Wall is your Filter Bubble – AR exhibition co-curated with Matthew Plummer-Fernandez for Abandon Normal Devices Festival (UK). This exhibition was shown at Laboratorio Arte Alameda (MX) in February 2018 –; EMPTY VESSELS||VULNERABLE BODIES – online/offline exhibition part of The Wrong Biennale and Presente Perfecto Festival (MX); Southampton: 2117 – Speculative Futures (UK) Digital Insights of 20th Century Painting (UK); When removed from view, removed from existence (UK); Archipiélago, fuera del círculo (MX); White into Green (UK). This year she presented [ANTI]MATERIA at the XV Symposium of Mexican Studies at University of Durham. During her professional career she has worked with several art professionals, both in the U.K and in Mexico, such as:  Annka Kultys gallery, K6 gallery, SPAMM, The Raritan Gallery, isthisit?, and CLON.

She’s also the co-founder of the experimental studio KE/MPwith which she had collaborated with Ceremonia, OFFFMX, Cut-Out fest, Tlanchana Fest and Futuros Asimétricos. Simultaneously she has been published in Código, LARMAGAZINE, El Asunto Urbano and PICNIC.

She’s currently one of the production mentors involved in the Immersion and Mixed Realities Lab at the Digital Culture Centre of Mexico City, she also teaches on the BA in Digital Art at UAEMex.

Tamar Clarke-Brown is a London based curator, writer and artist, working to develop critical cultural forms and open, playful projects. Her interdisciplinary practice is focused on experimental futurisms, choreographies, technologies and the black diaspora. Tamar has worked with institutions including Serpentine Galleries and Autograph ABP and presented at the ICA, Tate Galleries, Kadist (Paris), Bard Berlin and more. Tamar is a regular contributor to platforms including Protein Journal, AQNB and Screen Shot Magazine.

Suzannah Pettigrew is a multidisciplinary artist living and working in London. Pettigrew’s practice explores the collective / singular experience and exchange between online / offline realities in post-human society. She adapts a multitude of mediums including video, performance, installation and mixed media to interrogate the systems, imagery and language used to communicate and receive information in our contemporary landscape. Manifesto: Communicate the frisson and friction between reality and fiction. Explore our autonomous utopias and transgressive exchanges, emulate the experienced eroticism and aspirational validation. Layer, splice and re-appropriate imagery, rituals and materials through a series of processes. Seize and re-assign until there’s nothing left. Simultaneously manipulate our encounters with screens in spaces and the spaces within screens. Imbue a sense of relentless anticipation that something else will arrive.

Sophie Mars is a performance artist from ‘nowhere’ who interrogates the role of the body and sexuality, alongside ideas of intimacy, empathy and freedom in the digital age. She combines her two fields – performance and dance therapy –  in an attempt to create immersive, sensory and transformative experiences, often based on collective energy and the study of physical, virtual and ontological space.

Nati Cerutti challenges her experimentation as an artist, feeding her instinct with creativity and work.

Her story is constantly evolving, and she insists on building her own path.

Sounds are the core of everything that Nati Cerutti sets her mind on and from there she creates with her voice in the world of art as dj, producer and artist of mixed media.

An artist of honourable artifice. Nyne Derricott the metamorphosing fool revises and un-learns as a prerequisite for cruising futurity in the live second, subverting and non-sensicalising the now. When he looks at a wave crash he concentrates his eyes on the view as a whole, accepting the oceans movement, removing its duality.

HYDRA  is small, simple and possesses many heads. It undergoes morphallaxis when injured or severed and it appears not to age or die.

A series of translucent archetypes reveal the values of the HYDRA project:
sustainability, craft, and longevity in the post-digital future.

HYDRA seeks intelligent, biotechnologically advanced materials that can sync to our needs. In anticipation of this utopia, HYDRA uses natural latex rubber – its nearest resemblance – to create prototypes that emulate the aesthetic, feel, form and construction of the HYDRA uniform.

All prototypes are produced by hand through a meditative ritualistic approach.

An embryo of pure potential, CROSSLUCID is a new collective and the synthesis of Sylwana Zybura and Tomas C. Toth. Appearing in a transitional reality its aim is to instigate new associations and investigate the possibility of novel arrangements. It prefers ‘prototyping’ over ‘building’ while focused on cross-disciplinary collaborations, collectivity, experimentation and chance operations, creation of impulses and the possibilities of experience design. Its present work spans photography, collage, installation and character design, performance and creative direction. Initiated by the book ‘Landscapes Between Eternities’, its current project _landscapes_ is a upcoming set of immersive environments exploring the contemporary developments and hopes of ‘the self’.

George Jasper Stone is a multidisciplinary artist based in London. He works in content design, engaging in critical and aesthetic tactics that aim to undermine protocols of video and space.

Newest addition to the toaster is Tamār Clarke-Brown’s collaborator, Frankie Altamura, a New York based curator. Frankie does stuff and things both on and offline and has worked with institutions including the New Museum, Arcadia Missa and Studio Voltaire. 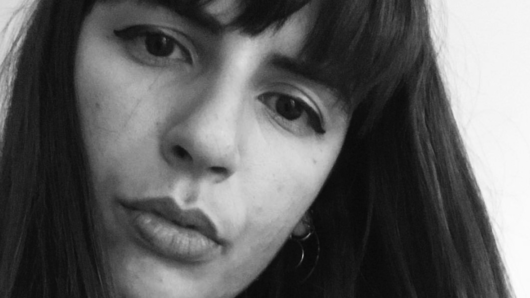 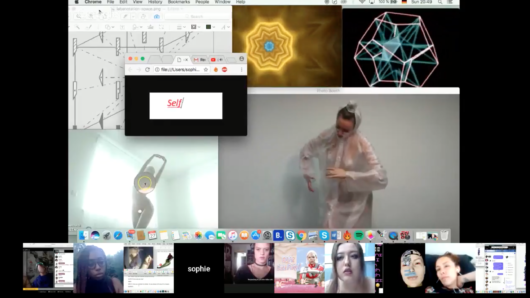