OUT of TOUCH by HERVISIONS
Denise Yap: Second Hand Smoke

Love incites an auditory reaction in birds and an aesthetic reaction in humans. While human beings display an innate and involuntary emotional reaction such as blushing, birds biologically develop and refine their mating calls during maturation. Through an investigation into sonic communications and expressions of birds, Singapore-based artist Denise Yap imagines mating calls made by human beings signalling to their future lovers in Second Hand Smoke.

At the centre of the work are two queer adolescent characters, Zion and Cae, situated on Twitter. While Zion and Cae tweet out their delicate and reticent affections for each other in the form of texts and GIFs, Yap invites us to be a stealthy reader of love letters plotting a sensual narrative.

Second Hand Smoke will be performed by Zion(@zion_newgrowth) and Cae (@cae_newgrowth) on Twitter. For a week tweets will be sent out every day at 12pm (GMT + 1) / 7pm (GMT + 8) from either of them, which will be responded to by the other on the following day. Their twitter profile pictures are left as default images for the characters to build an image of themselves through conversation. The conversation between Zion and Cae has been taken from Yap’s upcoming publication New Growth.

Presented by HERVISIONS OUT of TOUCH probes ways in which screen-based dialogues remediate the lack of touching in the absence of physical connection. Second Hand Smoke responds to the theme of OUT of TOUCH through imagined intimacy in a virtual and fictional world. 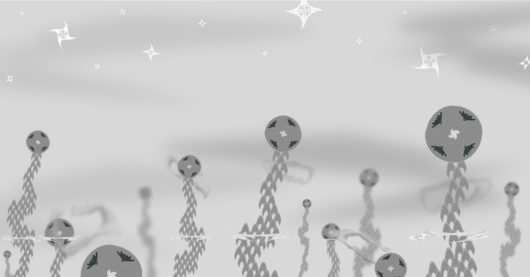 Sipping On Some Quiet by Denise Yap

I give in to the urge; I quickly submerge myself in this cool embrace. My eyes instinctively relax at the loss of gravity and roll back.

@Zion_NewGrowth
Every late afternoon without fail, ta swims in this lake and I perform my patrol duty around this lake from light to dark

Ta has stayed later than usual. By night fall, ta usually dries up and exits up east of the forest. Today ta has decided to stay and even come ashore towards my direction. I quickly take cover behind a tree.

The Moon was bald, which explains why her/his forehead could reflect the moonlight.

The Moon ta calls me. “My name is Cae, what about you?”

“So you follow me everyday while I float?”
“I don’t follow you. ” Ceah replied. I detect a hint of defensiveness in Ca-eh’s reply.

Denise Yap (b.1998) is a re-packager, an inbetween of pre-writer and post-reader; They draws from different sources of information to build a plausible world. Their artworks explore the potentiality of sincere investments such as alternative kinships and entanglements (and all the embarrassments!) of the human condition.

Yap’s recent group exhibitions include The Open Workshop for Singapore Art Week at Supernormal (2020), Eaten: A Capsule Museum for Future Possible Past Beings for Art After Dark at Gillman Barracks, Repel Revel at Grey Projects and A Very Objective Video at Telok Ayer Arts Club (all 2019).