A special preview screening of O’ Pierrot by Tanoa Sasraku for Art Licks in advance of a full exhibition at LUX opening in February 2020.  O’ Pierrot  is a new moving image work produced as part of The New Flesh residency which supports an emergent artist to work within the context of a professional costumiers and supported by LUX. The screening will be followed by a discussion between Tanoa Sasraku and Rosalind Nashashibi.

The film treads the stock, pantomime narrative of Pierrot the Clown, told this time from a lesbian, mixed-race, British perspective. The quest for British identity, so often played out in too-real grey-scale is here translated in glowing colour via 8mm film.

The life goal of Pierrot Mulatto (played by the artist) is to catch a giant sycamore seed that spins down every day from the arms of Harlequin Jack, a crazed black man in whiteface, driven mad by his own quest for British acceptance. Jack toys with Pierrot throughout the story, performing a satirical essence of white British sensibility whilst referencing early minstrel troupes’ caricatures of the post-slavery, black populace. Mixed-race Pierrot is encouraged to strive for her ‘white potential’ whilst battling rejection, rage and the bending of time amidst the English countryside. Is British assimilation merely a pipe dream for queer people of colour?

O’ Pierrot emerges from Sasraku’s four months at Academy Costumes, in South-East London, as part of The New Flesh Artists’ Residency. Through the design and fabrication of her own costumes, set and props, Sasraku engages in a re-telling of Kenneth Anger’s pioneering avant- garde, queer film Rabbit’s Moon. Costume drives the narrative of Sasraku’s silent fairy tale as the black, British grind enters the realm of the surreal.

Tanoa Sasraku (1995, Plymouth, Devon) works with themes examining the intersections of her identity as a young, mixed-race, gay woman and the endeavour to draw these senses of self together as one in 21st century England. 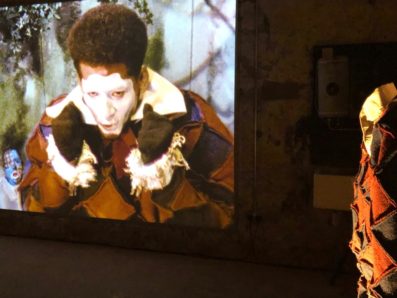