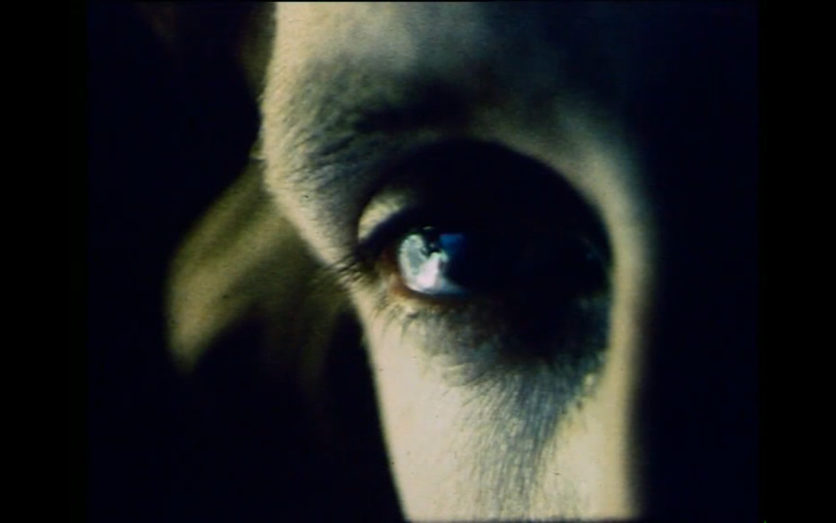 Both Stephen Dwoskin and Peter Whitehead, who died on 10 June, were founders of the original London Film-Makers’ Co-op in 1966, without necessarily being in the same room at the same time.

The story is tangled so I have to be precise for a minute. Whitehead’s involvement in the early Co-op is documented in a draft constitution dated 11 June 1966, and discovered by Mark Webber when he was preparing the Shoot Shoot Shoot exhibition decades later. There Whitehead is listed as a member of the organizing committee alongside Miles, Bob Cobbing, Jim Haynes, Paul Francis, one M. Ellis (never identified), and the notorious Harvey Matusow. The Co-op’s postal address at that moment was Better Books, out of which had sprung, a year to the day earlier, the famous poetry reading at the Albert Hall documented in Whitehead’s film Wholly Communion, which had been shown as a work-in-progress in the same shop in October 1965.

Other documents from the same time do not mention Whitehead, and give other names and addresses. This particular iteration of the Co-op, which was intended to be a branch of or sibling to the New York original, presided over by Jonas Mekas, tapered off with the summer. There were already internal rifts. Dwoskin’s recollections of the Co-op’s origins make no mention of Whitehead, and begin in September 1966, with an overlapping but slightly different cast, in which he and Simon Hartog are prominent players, Miles and Haynes are absent, and the New York connection is much weaker.

Wholly Communion was shown, along with a handful of Dwoskin’s shorts, at the Co-op’s inaugural festival at the Jeanetta Cochrane Theatre in October–November 1966; but this apart, there would not seem to be much to unite the two filmmakers. Wholly Communion had opened at the Academy Cinema, London’s most prestigious art cinema, in May 1966, and was in commercial distribution. Whitehead was making promos for the Rolling Stones, and seemed destined for a career outside the underground. What could be more different than Wholly Communion, a documentary of a public event, and Dwoskin’s Alone described in a festival preview as ‘a concentrated look at a person alone’, bringing out ‘the emotional and temporal qualities of alone-ness’?

But no-one looks more alone than Harry Fainlight, centre stage at the Albert Hall, interrupted by well-meaning friends, and later, back in his seat, visibly replaying the disaster over in his head. Moreover, both films draw attention to the man behind the camera, who seems to be responding to – or bound up with – what he sees, as much as he is simply recording. Raymond Durgnat, reviewing Wholly Communion on release, wrote that ‘the film is not just a newsreel so much as a piece of cinéma-vérité, as it penetrates, through the “event”, to feelings and hopes’ – those of its maker as much as anyone on screen. In the majority of Dwoskin’s films of this time, the relationship is between Dwoskin and the solitary woman in front of him, manifested in the exchange of looks.

It was only logical that both filmmakers would eventually put themselves on screen – Whitehead in The Fall (1969), his unclassifiable, psychedelic, fiction-documentary-diary hybrid, mostly made in the USA at the height of the anti-Vietnam war protest movement in 1967–8; Dwoskin, not for the last time, in Behindert (1974), the first of his films to reflect directly on his disability.

The mention of Durgnat is inevitable. He too was there at the ‘first’ birth of the Co-op in the early summer of 1966, and became its chairman after Matusow and Francis exited six months later. He met Dwoskin in late 1966, about the time he published Eros in the Cinema, a title suggestive of their like-mindedness, and one that Whitehead certainly read. Durgnat wrote the first published article on Dwoskin in the Co-op’s magazine, Cinim, in the summer of 1967, and the pair of them struck up a friendship. Durgnat knew Whitehead through the Slade School of Fine Art, where they had both studied film under Thorold Dickinson. When I first met Peter in 2004, he claimed Ray and his girlfriend had once visited his flat in Soho to perform – too explicitly, and at length – one of his screenplays.

Some of these are preserved in Dwoskin’s archive, one of them, Adrift on the Pacific, with a covering note – ‘I thought of your graphic style while scripting it’ –dated August 1968, by which time Durgnat had left the Co-op, Dwoskin was on his way out, and Whitehead was back in London editing The Fall. Something of a Swinging London story, very possibly the one Ray and his girlfriend performed in person, the central characters are a TV satirist called Roland, who went to school with Peter Whitehead, and his actress/dancer girlfriend, Kali, who has a cameo in a Whitehead film ‘called Son of Let’s All Get Stuffed in London Tonite, or something’. In one minutely described scene, Roland watches Alone in his flat – Kali calls it a ‘dirty movie’ – on a Specto 16mm analysing projector.

Dwoskin’s verdict on Adrift on the Pacific is not on record, but at any rate he does not seem to have discouraged Durgnat, whose unproduced play Attack of the Puppet People was the very distant ancestor of Dwoskin’s longest film, Central Bazaar (1976).

The Fall did not open at the Academy Cinema or get commercial distribution. It debuted at the Edinburgh International Film Festival, in August–September 1969, in which Dwoskin participated as a member of the LFMC, then had a handful of screenings in November at the ICA, which at the time was also Dwoskin’s main venue. Dwoskin’s films were being shown there that season by the New Cinema Club under the rubric ‘An Evening With Steve Dwoskin’. It was, in part, to ensure distribution for films like The Fall, that Whitehead, in early 1970, gave the use of his flat to the founders of The Other Cinema, principally Nick Hart-Williams and Peter Sainsbury, and to the editors of Afterimage, Sainsbury and Simon Field, before both outfits moved on.

The first issue of Afterimage ran an article on The Fall titled ‘The Inner Space Project’, citing an article of Whitehead’s in which he had written of the need – in a media-saturated environment – to escape into ‘inner space’; in the second issue Dwoskin praised David Larcher’s Mare’s Tail, which had also debuted at Edinburgh in 1969, as ‘an epic film flight into an inner space’.

In May–June 1970 The Other Cinema mounted its first major event, a Festival of British Independents, at The Place, that included the debut of Dwoskin’s Moment together with most of the Whitehead back catalogue (as well as Mare’s Tail). As had happened with the Co-op, Dwoskin remained an active figure in The Other Cinema while Whitehead disappeared, but both remained in its catalogue. In the year of The Other Cinema’s partial demise, 1977, Whitehead made what would be his last film for more than three decades, his ‘requiem’ for the 1960s, Fire in the Water, a complex re-editing of his earlier work that prefigures Dwoskin’s Trying to Kiss the Moon (1995).

Perhaps the strongest affinity between the two filmmakers is to be found in the collaborative works Whitehead made after The Fall: the never completed Lilford Hall (1969), made with Penny Slinger, and Daddy (1973), made with Niki de Saint Phalle. In some respects resembling Dwoskin’s Dyn Amo (1972), Daddy includes scenes of an abusive patriarch tied up in a wheelchair and tormented by his daughter (played by de Saint Phalle), a role ‘emblematic’, as Laura Mulvey has written ‘of the masochist spectator of film, stripped of the voyeuristic and active qualities (that I associated with spectatorship in my article “Visual Pleasure and Narrative Cinema”)’. Slinger meanwhile has described the genesis of Lilford Hall in a way that evokes Dwoskin’s collaborations from the same period, such as Trixi (1971): ‘I wanted to be both subject and object, so Peter, who is a film-maker, took the pictures of me, with my direction’. Not long after making it she collaborated on an avant-garde theatre production, Picasso’s Four Little Girls, with Carolee Schneemann, who had recently worked with Dwoskin on Times For (1970).

Still, whether they ever met remains an open question. ‘I was a recluse frankly,’ was Whitehead’s somewhat surprising memory of things. 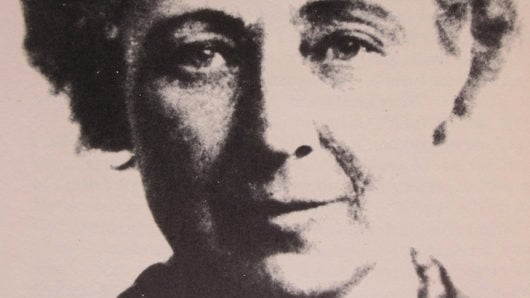 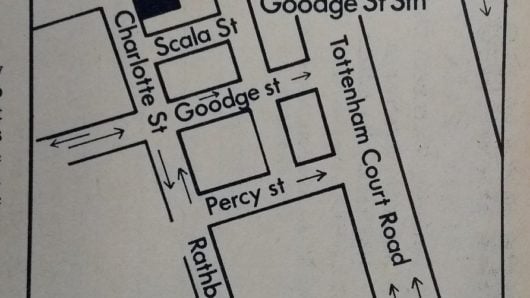 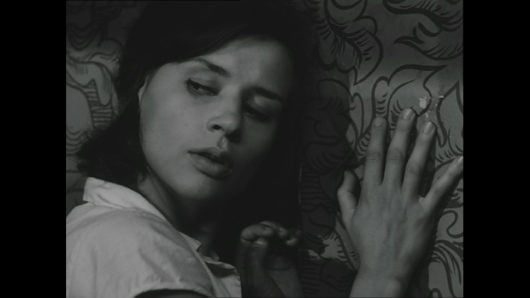 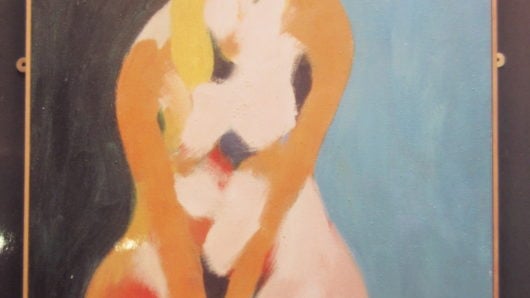