Trying to Kiss the Moon, which we are showing on the evening of Thursday 22 July, is an autobiographical film that breaks off mid-sentence, suggests rather than says, shows without completely revealing. To speak more directly, central figures in Dwoskin’s life pass across the screen unidentified. Texture takes precedence over events, even life-changing ones. The film’s title, to put it crudely, is about the impossible attempt to recover the past – but a past that is visible. What was novel to the generation before Dwoskin was that the past, even in some cases the private life of families, could be recovered in moving images, in his case the home movies shot by Dwoskin’s father, Henry.

The film was conceived after Dwoskin saw some of these home movies, and his mother’s photo albums, during a trip to the US in 1993. At the following year’s Rotterdam International Film Festival he showed a fifteen-minute sample on video, under the title Homemovies, and they became a major part of Trying to Kiss the Moon’s bricolage. But, crucially, Dwoskin chose not to reproduce these films and photos flat, seamlessly with material shot in the present, but instead to render them in three dimensions, refilmed off various screens and monitors. During this 1993 trip he filmed his and his sister Mary’s first encounters with films of their childhood at her home on Long Island; likewise with his mother’s photos at her home in Florida, and these scenes appear in the finished film. 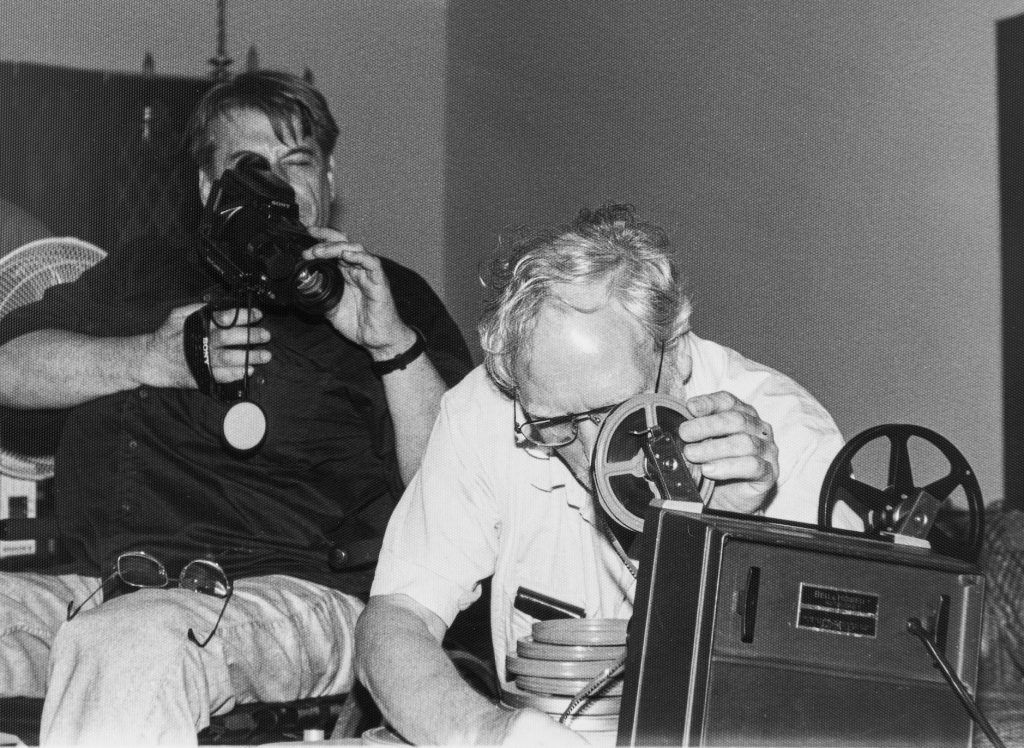 Dwoskin and his friend Jack Warner at his sister Mary’s home, 1993

Back in London, he went through other home movies with Ian Wiblin, who filmed them on Hi-8, nursing the fragile material through the projector. Often the clips are shown with the sound of a projector whirring or editing machine clattering, at other times in silence; their materiality as film clips, not windows on to the past, is never hidden. Dwoskin’s use of this old footage recalls the techniques of ‘structural’ or ‘structural/materialist’ film, present in his films of the early 1970s, but now for a different end. Here it simulates the mind’s desire to see into the past, more clearly than it ever can.

In the scenes with Dwoskin’s mother and sister, we hear attempts to identify old friends and old places that haven’t survived. Sometimes visible on screen, and presiding over the whole enterprise, is the principal filmmaker Henry Dwoskin, who died in 1976. Typically, Stephen Dwoskin never reflects on how by filming himself he had continued where his father left off; everything is implicit.

Whereas the scenes of Dwoskin’s childhood are relatively cohesive, his own home movies, which blend into his films proper, are harder to read. Who are all these people? Not even Dwoskin knows in every case. In one scene, he and his editor Anthea Kennedy rewind a section of film to identify someone on the set of L’Esprit de Brendan Behan, and come away empty-handed. But in others, he knows and the audience doesn’t – perhaps most glaringly when his ex-wife appears. 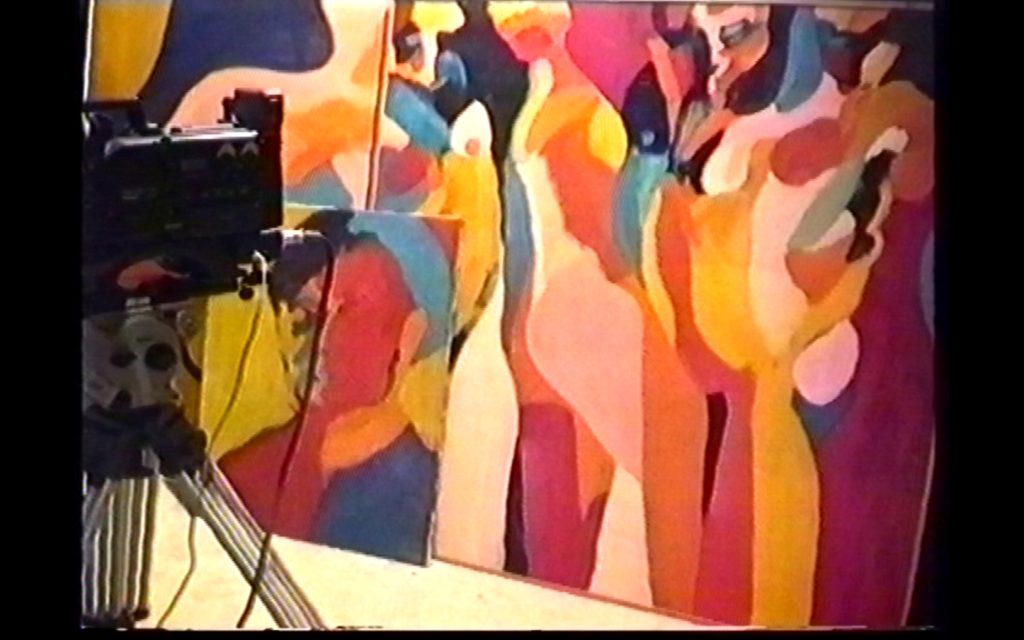 Dwoskin’s paintings, as seen in Trying to Kiss the Moon

Inevitably, with all its scenes of an American childhood, the film is a reflection on displacement and diaspora. One of the questions Dwoskin asks himself, in voiceover, but doesn’t fully answer, is what might have happened had he returned when he was young. The film begins with the voice of another ‘D.P.’, Robert Kramer (himself unidentified), who Dwoskin then seems to analyse – and surely projects on to – as someone stranded between continents, ‘a very awkward position’.

What is made clear by the archive is how much detail Dwoskin deliberately excised from the film. He wrote a long piece of autobiographical text in preparation, titled ‘Before It’s Too Late’, but used hardly any of it in the voiceover, which is fragmentary in the extreme. To borrow from T. S. Eliot, another American expatriate, understanding the past is not a question of events, but of what happened; Trying to Kiss the Moon uses the most personal details to show how difficult that task is, even when it is all apparently up there on the screen.

Henry K. Miller is a senior research fellow at the University of Reading, editor of The Essential Raymond Durgnat, and author of the forthcoming The First True Hitchcock.