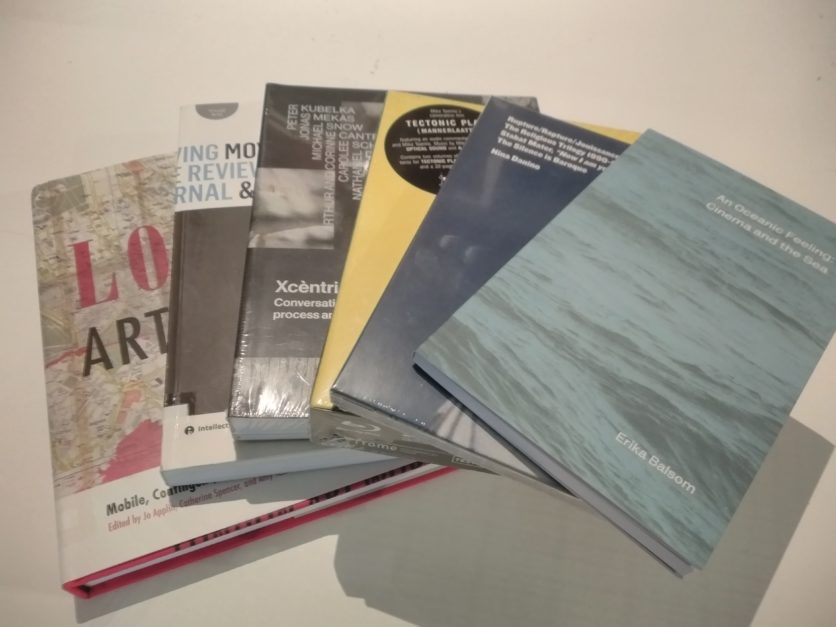 Time again for our annual round up of the best artists’ moving image publications of the past year!

The Scala Book. Jane Giles, published by FAB Books. Extraordinary and literally gigantic paean to London’s legendary independent cinema which twisted the minds of a generation of filmgoers and changed the face of independent film in the capital.

From the Third Eye. The Evergreen Review Film Reader. edited by Ed Halter and Barney Rosset. Published in USA by Seven Stories Books. Essential collection of writing on underground film from the legendary Evergreen Review

An Oceanic Feeling: Cinema and the Sea, Erika Balsom. Book published by Govett-Brewster. Beautiful idiosyncratic essay exploring the history of cinema’s engagement with the sea.

Xcèntric Cinema. Conversations on the creative process and the filmic vision, edited by Gonzalo de Lucas. Book published by CCCB in Spain. Eclectic collection of interviews by key international filmmakers who have influenced the cinema programme of the CCCB in Barcelona.

Sins of the Fleshapoids, Mike Kuchar. DVD published by Other Cinema. Legendary Kuchar underground epic from the Kuchars finally available on DVD!

Nightcleaners & ´36 to ´77 (boxset including 2 books and 2 DVDs or Blurays). Published by LUX, Raven Row and Koenig. Boxset of two legendary films by The Berwick Street Collective, seven years in the making with newly restored transfers of the films in a box with 2 books!. Just about to come out in shops with a special edition blu-ray edition available only from LUX. Watch LUX social media for an announcement soon, (hopefully before Christmas!)